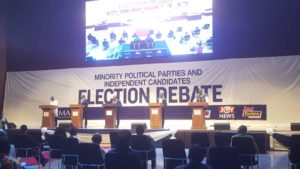 Six independent presidential aspirants in the forthcoming 2020 general elections, have called for a holistic national approach involving all stakeholders to curb corruption in the country.

They made the assertion that efforts towards weeding out corruption in the country would not bear fruits if the fight was left for specific institutions and outdated systems.

The six made the call in Accra, during the Minority Political Parties and Independent Candidates Election Debate 2020.

The debate was organised by Joy News in collaboration with IMANI Centre for Policy and Education, and aimed at perusing the policies and commitment of candidates outside remits of the governing New Patriotic Party (NPP) and the largest opposition party, the National Democratic Congress (NDC).

The candidates were assessed on articulation of their ideas and their ability to mold their vision to suit Ghana’s developmental agenda if given the mandate in the upcoming General Elections.

Mr Koranteng noted that his administration would have a high moral and ethical standard imbedded in the Minimum Acceptable Requirements (MARs), and within these requirements ministries or people could work effectively.

He said there would be an officer for the Office of Supervisory Jurisdiction who would work hand in hand with the Director of Public Prosecutions on a zero-tolerance approach.

Mr Ampofo also stated that procurement had been in the centre of corruption issues, as such, his administration would setup a procurement department at the Presidency to ensure things purchased go through competitive bidding.

He said that there would be a Chief of Staff, and two other people who would be responsible for procurement, adding that “before anything is purchased it should be scrutinized and I will ensure this is done”.

On his part, Mr Morgan said in dealing with corruption, the focus should not only be about procurement which is just a sub –sector, but rather tackle institutional corruption.

He noted that the public go to institutions for services and that was where the corruption was being practiced, saying, the system should be managed by corrupt-free people who are dedicated to help in the fight against the menace.

Mr Teye also underscored the need to redefine corruption, and understand that politicians were dwellers of corruption and the designers of corruption were the electorates, and this starts during campaign time.

He said his administration would ensure the State sponsors election campaigns for candidates and not political parties, noting, in his assessment it would cost GH¢160,000.00

He said, his administration would ensure that there would be regional base debates and this would be based on policies, and the idea was to move election campaigns from the platforms to debate centers, adding that “if elections is free and fair then electorates should not demand money from candidates, don’t sell your vote”.

Mr Gane noted his administration would design a process of ensuring that proper supervision was applied to every decision that was made for spending.