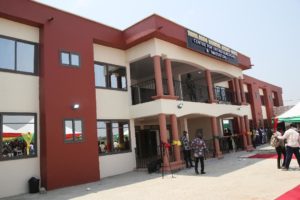 The Dawhenya project, with its 75 greenhouse domes, is part of a larger scheme by the NEIP to build 1000 green houses across the country boost government’s flagship programme- Planting for Food and Jobs- aimed at ensuring food security and modernizing agriculture to make it attractive to the youth.

The 75 greenhouse domes had a production capacity of 4,500 tons of tomatoes annually, and an estimated yearly revenue of some GH¢11 million. It would employ a total of 230 people.

The Entrepreneurship Innovation Centre, a multi-purpose facility with 192 rooms, conference centre and recreational areas would facilitate the training of modern agriculturists and young entrepreneurs venturing into various fields of economic activities.

The facility was one of three such establishments planned by the Government for the country. The other two would be situated at Akumadan in the Ashanti Region and Bawjiase in the Central Region.

At a short ceremony at the forecourts of the Centre, President Akufo-Addo indicated that the greenhouse Estate project was the beginning of the journey to wean the country’s rain-fed farming.

He noted that agriculture played a critical role in the socio-economic development, saying that government was determined to modernize Ghana’s agriculture by adopting appropriate technology, to make the sector attractive to the youth.

Enumerating the advantages of greenhouse vegetable cultivation, the President pointed out that the technology allowed farmers to plant under normal and optimum conditions, ensured good development of crops and guaranteed decent prizes for produce.

He was sure that with the onset of the project, seasonal planting of vegetables would be a thing of the past.

President Akufo-Addo was optimistic that if more irrigation, smart business and trade policies’ and dynamic private agribusiness sector were harnessed to work side by side with government, agriculture alone could rake in billions of dollars for the country.

He made reference to World Bank figures that estimated that Africa could command $1 trillion from agriculture in 2030′ compared to $313 billion realised in 2010.

The President said two per cent of the over 250,000 young men and women who graduated annually from Ghana’s tertiary institutions got absorbed into the formal sector with the rest going into the informal arena or unemployed.

Government’s partial response to the development, he said, was the establishment of the Nation Builders Corps that had provided some 100, 000 jobs to unemployed graduates.

“We are on course to remedying the situation more permanently and give greater opportunity for the youth by building a strong and resilient economy with focus on diversified Ghanaian agriculture,” he said.

President Akufo-Addo said the Greenhouse initiative was an integral part of the Plantinng for Food and Jobs (PFJ’s) programme of government, urging the Business Development ministry, under which remit the project fell, to collaborate effectively with ministries of food and agriculture and Environment, science and technology, to enhance the initiative.

He further asked the Business Development ministry to leverage the PFJ’s initiative and the Free Senior High School policy , both aimed at mainstreaming youth into country’s development, to build the capacity of young entrepreneurs to make them competitive  in vegetable farming “so that they earn a good living for themselves and create jobs for others.”

President Akufo-Addo also urged all other sectors of the economy to harness the opportunities that the COVID-19 pandemic presented.

“While COVID-19 has wreaked havoc on all economies including our own, and has had a negative impact on health and businesses, it has also presented opportunities which are being seized by far sighted entrepreneurs.

“We have an opportunity to deepen our self-reliance and minimize our exposure and dependence on external sources… We must develop domestic solutions to combat the challenges presented by the pandemic and strengthen indigenous productive capacity,” he charged.