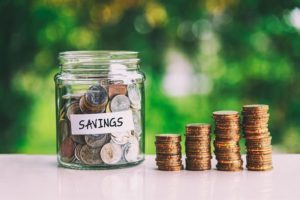 The establishment of the Village Savings and Loans Associations (VSLAs) Scheme under the Sustainable Land and Water Management Project (SLWMP) is impacting positively on poor rural communities.

It has increased the climate change resilience of many rural communities in the five regions of the north and enabled women to engage in economic activities for income generation and improved livelihood.

Mr Asher Nkegbe, the Upper East Regional Director of the Environmental Protection Agency (EPA), who is also the Head of the Technical Coordination Office (TCO) of the SLWMP, said this during separate working visits to inspect progress of work of the VSLAs groups in the project areas.

According to the Regional Director, each group is composed of 30 self-selected individuals who meet weekly and members save through contributions decided by the group.

“At each meeting, every member must pay between GH¢1.00 to GH¢5.00 depending on one’s capacity. This enables them to build their savings more easily.

“Savings are maintained in a loan fund from which members can borrow in small amounts, up to three times their individual savings. Loans are for a minimum of six months and a maximum of one year, depending on the purpose of the loan, either investment in the agric sector or small business,” Mr Nkegbe explained.

“To ensure effective governance and the management process, each VSLA group elects a chairperson, secretary, treasurer, and two money-counters who form its executive committee. In addition, members select three others and entrust each with a key to one of the three locks on the cashbox where the group’s funds are kept.

“This governance structure serves as an internal control system. All transactions are carried out at weekly meetings in front of all members, ensuring transparency and accountability,” he added.

The Regional Director explained that the SLWMP being funded by the Global Environmental Facility (GEF) through the World Bank, introduced the concept of VSLAs to 227 communities in the project areas and noted that currently about 3,316 people were benefiting indirectly from the concept.

He said the concept which was to increase the resilience of rural communities to the impact of climate change, also aimed at increasing the capacity of vulnerable households in the Northern Savannah ecosystem.

Some women who spoke to the media explained that since the establishment of the VSLAs in their communities, groups, mainly rural women under the SLWMP, had been saving and giving out loans to members to boost their income generating activities such as petty trading, shea butter processing, soap making and pito brewing.

The women indicated that as a result of the VSLAs concept, members were able to access money to buy foodstuffs to feed their families, particularly during poor yields and the lean season.

“We are very grateful to the project for introducing this VSLAs intervention in our communities. Before the intervention anytime drought or floods occur and affect the harvest, feeding becomes a problem but with the VSLAs we can now access loans from it and purchase food items to feed our families particularly our children,” Mrs Abina Akolpoka, one of the women leaders of the VSLAs from Builsa South District said.