August 6, 2020 General News Comments Off on Blogger before court charged for possession of pornographic materials

Anderson Ofosuhene Anim a.k.a Morio Gee, a web designer and a blogger has been busted by the police over Pornography.

Anim is alleged to have collected monies from victims, both children and adult under the pretext of pulling down their nude pictures and videos from the internet.

Despite collecting the monies, Anim allegedly splashed the videos and pictures of the victims on social media.

The accused said to have conducted his activities at Osino, in the Eastern Region, allegedly operated the empressleaks website.

It is believed that Anim had invested the proceeds of crime in houses and vehicles after he had made victims to pay between GH¢100.00 and GH¢500.00 through mobile money.

Anim appeared before an Accra Circuit Court, with charges of child pornography, publication of obscene material and general provision of cybercrime and money laundering.

The court presided over by Mrs Susana Eduful preserved his plea pending further investigations into the matter.

The court has remanded Anim into Police custody to reappear on August 19.

The case of prosecution is that, in January last year, the Cybercrime Unit of Criminal Investigation Department (CID) through intelligence gathered that empressleaks was operating in the internet space by publishing nude videos and pictures of Ghanaian children and adults without their knowledge.

Prosecution said further inquiry revealed that Anim, the owner of the website collected monies from victims via mobile money before pulling down videos and pictures of victims from the website.

But even after paying the monies, the videos and pictures however were seen on social media platforms.

Prosecution said on January 30, this year, the Cybercrime Unit team proceeded to Anim’s residence at Osino, where he was found uploading videos on empressleaks website.

According to prosecution, all digital devices were retrieved and efforts were underway to apprehend Anim’s accomplices who took nude videos and pictures of victims and send same to him (Anim). 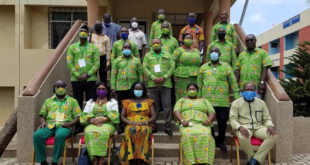