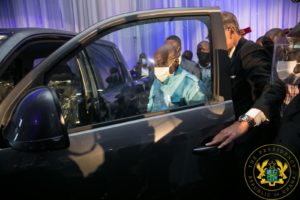 The cars, the Tiguan and Tremont sport utility vehicles, the midsize Passat sedan and the Amarok pickup truck, were assembled at the Accra North Industrial Area Assembly Plant of VW in the first phase of production that will see the assembling of some 5,000 vehicles annually in Ghana by the German marque.

At a short ceremony in Accra, an elated President Akufo-Addo declared; “It’s a good day, a very good day for Ghana.”

That served as a growth point for government’s agenda for the industrial transformation of the country as well as a pointer to the confidence reposed in the Ghanaian economy by investors, he said.

Further, the establishment of the Volkswagen assembly line in Ghana for both the domestic and the West African market would significantly reduce the country’s foreign import bills, enable it to save foreign exchange and strengthen the cedi, he said.

That would also reduce the over reliance on used vehicle imports and create skilled jobs for the Ghanaian youth, he said.

President Akufo-Addo said the development would also enable Ghanaians to have access to affordable and high-quality vehicles that matched global standards.

He cited the 60’s and 70’s when the Volkswagen Beetle was the vehicle of choice for most Ghanaian first time automobile buyers, saying; “It is gratifying to note that VW is going beyond the ‘Beetle’ to assemble in Ghana other brands, namely Tiguan, Teramont, Amarok, Caddy, Polo and Passat.”

“Volkswagen means ‘The People’s Car’ so I’m expectant that the brands being assembled in Ghana will not only be affordable, but also be of the highest quality.”

He pledged government’s support to ensuring the sustainability and profitability of the venture in Ghana, pointing out that the VW’s presence in the country had been facilitated by government’s bold move to develop the Ghana Automotive Development Policy.

President Akufo-Addo was hopeful that other global automobile companies, which had indicated their preparedness to set-up shops in Ghana, “will soon follow the remarkable and pioneering example of Volkswagen.”

He assured local stakeholders engaged in the automotive industry value-chain of government’s commitment to protecting their livelihoods.

He said his administration would continue to introduce appropriate incentives and support interventions to attract both foreign and local investments into the automotive assembly and manufacturing sector of Ghana.

“I have engaged with representatives of the various stakeholder groupings, and given them the assurance that Government will introduce the necessary policy safeguards to protect their interests, and enable them, also, over time, to adapt to the new realities of the emerging automotive sector,” the President said.

“It is worth noting that, already, a Ghanaian owned company, the Kantanka Group, is in possession of a license to undertake auto-assembly operations in Ghana. I believe the development and modernisation of the industry present a “win-win” opportunity for both foreign and local companies engaged in the industry value chain.”

The President was confident that Ghana was on course to a “bold new beginning” to develop large scale strategic anchor industries that would leap frog the country to the state of developed nations.

Volkswagen and the Government of Ghana on Thursday, August 30, 2018, signed a Memorandum of Understanding (MoU) to set up an automotive assembly plant to produce Volkswagen cars in the country, during a brief visit of German Chancellor Angela Merkel to Ghana.

The Accra Assembly Plant is the fifth of such facilities established by Volkswagen in sub-Saharan Africa.