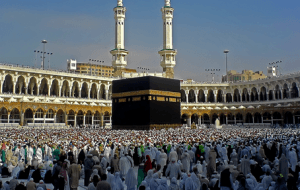 Muslim pilgrims started performing the annual Hajj pilgrimage on Wednesday, although Islam’s largest gathering has been significantly curtailed due to the coronavirus pandemic.

A few thousand people are taking part, a fraction of the usually 2.5 million people from all over the world who usually gather annually in the holy city of Mecca.

This year, only Saudis and foreigners from 160 nations already residing in the kingdom are taking part.

International flights to and from Saudi Arabia have been suspended since March. The kingdom has reported more than 270,000 confirmed coronavirus cases.

Pilgrims start the Hajj by walking seven times in a counter-clockwise direction around the Kaaba, the cube-shaped holy building inside the Grand Mosque in Mecca. They also run back and forth between two historical hills in the area.

The pilgrims walked along signs put on the floor to maintain social distancing, a major difference from the usually packed Grand Mosque every year during the Hajj. They were also carrying umbrellas to protect them amid the summer heat.

Ahead of the Hajj, pilgrims spent one week quarantined at home and another four days in isolation in Mecca, as part of strict measures imposed by authorities to prevent the spread of Covid-19 among pilgrims, according to the Ministry of Media.

Pilgrims will spend the night at the Mina valley before heading to Mount Arafat, around 20 kilometres east of Mecca, where the Hajj reaches its peak on Thursday.