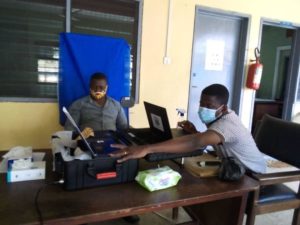 The phase five of the ongoing Voters Registration exercise to compile a new electoral roll started smoothly in the Ayawaso East Constituency on Saturday.

Mr Yakubu Abukari, the Presiding Officer for the Research Polling Station at Nima, told the Ghana News Agency that the registration process was going on smoothly without any hitches.

He said the registration had seen tremendous improvement since the first phase, adding that people now understand the need for social distancing, adherence to washing of hands and wearing of nose masks to the centres.

Mr Abdul Wahab Abdallah, Data Entry Clerk of the Malam Sani Polling Station, noted that the machines were operating at optimal level and registrants were also following the rules for entering the registration centres.

He said the centre had not encountered any challenges in the cause of the registration.

Mr Mohammed Mutawakil, Polling Agent for the NDC, said there were no intruders.

“We are vigilant and encouraging every citizen to participate in the exercise as that is the only means to vote in the December 7, poll”.

He stated that they were prepared to resolve any challenges that might arise in the process of the registration through peaceful means.

Mr Daniel Agure Atoah, the Registration Officer of the Pentecost Emmanuel Temple Nima Two Polling, also affirmed that the process was without any operational bottlenecks.

Mr Isaac Asare, the Registration Officer at St Louis Polling Station, commended the political party representatives, security officials and other opinion leaders in the community for contributing to the calm and smooth operations at the Centre.