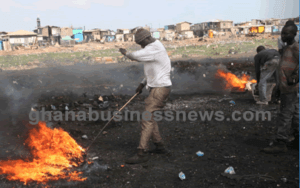 The Environmental Protection Agency (EPA) has stated its resolve to arrest and prosecute scrap dealers and others who engage in open burning of electronic and other waste products.

The Agency said any person involved in all acts of open burning including the burning of saw dusts, burning of coconut husks, burning of lorry tyres to skin animal hides and to recover steel wires would be arrested and prosecuted in accordance with the law.

Mr John A. Pwamang, the Acting Executive Director, EPA said this at a stakeholders meeting on ways to address air pollution, caused mainly by scrap dealers at Agbogbloshie and its environs.

Parliament in 2016 passed the Hazardous and Electronic Waste Control and Management Act (Act 917).

The Act, the Executive Director explained, marked the initiation of two key provisions of Act 917, which were critical to the successful implementation of the new Law.

“The first is the designation of the external service provider, to verify, assess and collect the Advance Recycle Eco Fee on all electrical and electronic equipment, under the Fifth Schedule of Act 917, imported from all exporting countries.

“Second is the establishment of a state-of-the-art recycling facility to be constructed at Agbogbloshie, in fulfillment of section 31 of Act 917,” he said.

Mr Pwamang said the government in August 2018 launched the Integrated Electronic Waste Management Programme and signed an agreement with the government of the Federal Republic of Germany for a project to support Ghana to implement the Act,2016 (Act 917).

He said one of the key components of the project was to improve upon the collection, transportation and storage of electrical and electronic wastes in the country using the Greater Accra region as pilot.

Mr Pwamang said the project would create self-sustaining jobs for the youth when done well.

He stressed the commitment of the government and its development partners to improve the e-waste situation in the country for sound environmental development.

Statistics show that, an estimated 40 to 50 million tons of e-waste are generated annually, with Ghana serving as the final destination for e-wastes from the Western world.

It is noted that used electronic and electrical equipment imported into the country continue to be the major source of electronic waste, as many have not been tested for functionality, and in contravention of regional and international laws, such as the Bamako Convention, the Basel Convention, and European Union e-waste shipment regulations.

To address the problem of the burning of electrical wires for copper recovery, Pure Earth, with local partners like the Green Advocacy Ghana, KFS and the Greater Accra Scrap Association (GASDA) supported by GIZ opened an e-waste recycling facility in Agbogbloshie, Accra, in 2014.

The facility houses wire-stripping granulator machines in blue shipping containers inside the scrapyard. The granulators separate metals from cable plastic coatings.
e-waste
Alhaji Mohammed Ali, the Secretary of GASDA commended development partners and stakeholders for the facility to help curb the menace of air pollution, which had caused health problems for individuals and companies operating at Agbogbloshie.

He said the facility had led to the reduction of air pollution and said about 50 per cent of scrap dealers now channeled their cables to the facility instead of burning the products for coppers.

Alhaji Ali pledged the Association’s commitment to educate its members on the need to avoid air pollution.

“We support the project and will work with the government to adhere to the provisions of the Act to ensure sustainable protection of the environment devoid of all forms of pollution,” he said.