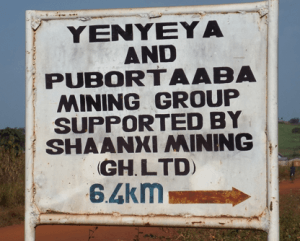 Small Scale Mining Groups at the Gbane Community in the Talensi District of the Upper East Region have appealed to the mining regulatory bodies in the country not grant permit to the Shaanxi Mining Company to venture into large scale mining in the area.

They said it would be prudent on the part of the mining regulatory bodies, including the Mineral Commission, Environmental Protection Agency (EPA) and the Mining Inspectorate Division to do thorough consultations to inform them of the merits and demerits of such a possibility.

The Small Scale Mining groups, which include the Unique Mining Group and the Nalamtaaba Mining Group, made the call when a Consultant engaged them about the interest expressed by the Shaanxi Mining Company Limited to go into large scale mining in the area.

In 2008, Mr Charlse Nadanbon, the Chief Executive Officer of Yenyaya Mining Group, who was selected among small scale mining groups by government to go to China and learn on sustainable mining activities, persuaded and brought the Chinese Mining Company to Ghana, specifically the Gbane community.

Since then it had been providing mining support services to Yenyaya Mining Group and Pubortaaba Mining Group, until now that it started seeking for a permit to go into large scale mining in the area where the small scale miners are operating.

According to the Small Scale Mining Groups, they have all acquired all the necessary mining permits and documents and therefore would not succumb to any powers that would want to circumvent the laws to allow the Shanxi Mining Company Limited to mine on their concessions without the proper engagement and agreement.

“We will not sit down and allow a foreign mining Company to threaten us on our very livelihoods, which we have been depending on for many years. Unless the proper thing is done by bringing all of us the Small Scale Mining groups to sit down and dialogue with the Shanxi Mining Company Limited,” he said.

The group who threatened that they would resist any attempt if their demand and interest were not met, called on the Mining regulatory bodies to ensure that their request was followed before the consideration of granting the Shanxi Mining Company Limited to go into large scale mining.