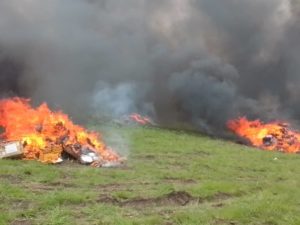 The Narcotic Control Commission in collaboration with the state securities on Friday destroyed exhibits of narcotic drugs intercepted by their operatives at the Bundase Military Camp following a court order.

The consignment, which had been packaged and ready for shipping, was confiscated on June 05, 2020, upon a tip-off by the collaborative efforts of drug enforcement agencies at the Kpoglo Border.

Mr Francis Kofi Torkornoo, the Acting Director-General, Narcotics Control Board, speaking at the exercise said the event was to mark this year’s World Drug Day, instituted by the United Nations’ General Assembly Resolution 42/112 on December 7, 1987.

This year’s theme: “Better Knowledge for Better Care”, was necessary especially in the era of social media where people are being exploited with misinformation on illicit drugs in an attempt to lure them into drug use.

The theme was also aimed at improving the understanding of the world drug problem and at fostering greater international cooperation for countering its impact on health, governance, and security.

He said the celebration of the provided opportunity for the country to examine and put in perspective the approach to drug demand reduction among the citizenry especially the youth who were most vulnerable.

Mr Torkornoo said the day was also to increase awareness on the debilitating effects of drug abuse and illicit drug trafficking as well as the threats the incident posed to the national security.

He said when people are equipped with the requisite information on the harmful effects of substance use, they were likely to refrain from drug abuse to save their lives from the havoc caused by the substance.

The Acting Director-General said the Commission would continue to work closely with its local and international partners, and civil society organisations to deepen and strengthen collaboration in curbing the drug menace in the country.

Parliament passed the Narcotics Control Commission Act, 2020 on Friday, March 20, and it was assented to by President Akufo Addo on Monday, May 11, 2020.

The Act, under section 13, provides the independence of the Commission in the execution of its mandate.

The Ministry of Gender, Children and Social Protection (MoGCSP) has observed that human trafficking and …