June 19, 2020 Sports Comments Off on Ezekiel Ansah: The pro football player from Ghana

Ezekiel Ansah was accepted to Brigham Young University on an academic scholarship in 2008, which meant that the Accra-born athlete was accepted into a private American university far from his home in Ghana.

Interested in business and athletics, Ansah accepted the opportunity and packed his bags to head to the state of Utah in the United States. At the time, Ansah knew he wanted to pursue athletics, but wasn’t sure which sport he preferred.

His first choice, basketball, was short-lived with the BYU Cougars. Undeterred, Ansah moved on to try out track and field, which proved a success. However, in 2010, Ansah tried out for the Cougars football squad.

While Ansah had the talent to become a walk-on player, he’d never played American football before. In fact, his sophomore year at the university was spent catching up on the sport’s rules, and even learning how to arrange his protective football gear.

Despite not knowing rules and never having worn football pads before, Ansah was a natural talent on the ‘gridiron’, a common name used for the American football field. By his senior season in 2012, ‘Ziggy’ was a strong addition to BYU’s prominent defensive squad, which ranked first in the nation in 2012 for rushing defense stats.

As the 2013 NFL Draft approached, Ansah’s name went from a relatively unknown quantity to being considered by many pundits to be the sleeper pick of that year’s draft. However, the NFL is a business that aims to see a return on investment, and Ansah’s youth and his brief time playing football made him an uneasy investment for many.

Despite concerns that Ansah may not be a reliable player, he was selected in the first round (fifth overall) in the 2013 NFL Draft. The Lions sought his raw talent with the hopes that senior players and a collective team mentality would help refine his technical defensive skills.

Ansah’s first contract in the NFL was proof that the athlete had transitioned to a true pro. The Lions signed Ansah to a four-year contract for a total of $18.9 million, which included a signing bonus of $11.9 million.

Ansah proved his worth to the team, quickly becoming the Detroit Lions’ most outstanding rookie and leading all NFL rookies in number of sacks. For the next four years, Ansah worked hard with the Lions and picked up awards like the NFC Defensive Player of the Week along the way.

He also invested in other projects outside his NFL career, like the Ezekiel Ansah Foundation in Ghana, which he started in 2017. The foundation’s mission is to help create opportunities for those interested in sports and education. Ansah often shares pictures on his social media account of the bustling American football camps held in Ghana every summer.

The next year, in 2018, the Lions placed a ‘franchise tag’ on Ansah, which meant that he would play one more year with the team before moving on to become a free agent. However, this contract also came with a cool $17.5 million check. 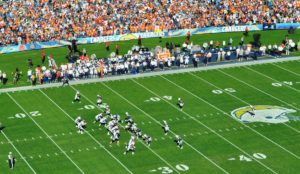 Though Ansah played his first five years in the NFL for the Detroit Lions, his 2019 move to the Seattle Seahawks saw the defensive end sign a $9 million-dollar contract. While NFL futures odds and picks favor teams like the New Orleans Saints or Kansas City Chiefs for the upcoming season, the Seahawks are a strong team whose 2013 squad is largely considered the strongest NFL team of the decade.

However, Ansah is once again a free agent, which means that multiple teams have their eye on the player as a possible defensive end. Though Ansah may be motivated to try to stay with the Seahawks given their impressive history, the Philadelphia Eagles have also shown interest in him.

One major challenge that Ansah currently faces is ongoing injuries to his labrum, ankle, and neck. These injuries affected his 2018 play with the Lions as well as his single season with the Seahawks and may prevent him from being picked up for the 2020-21 season as a free agent.

This doesn’t mean that Ziggy’s time playing football is over though. Given Ansah’s ample history in the NFL, it isn’t inconceivable that the player could return to the gridiron after one year of rest and recuperation for his injuries.