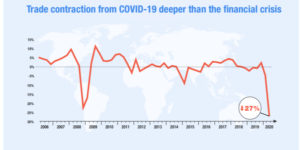 The full impacts of the COVID-19 pandemic on the world’s economy is expected but not yet fully known. But as countries and institutions around the world continue to respond to the impacts, emerging images of the future of world trade is depressing.

The United Nations Conference on Trade and Development (UNCTAD) says international trade in goods is expected to decline significantly in the coming months due to the virus.

In an update copied to ghanabusinessnews.com, UNCTAD says the pandemic has severely hit the economies of developing and developed countries alike. 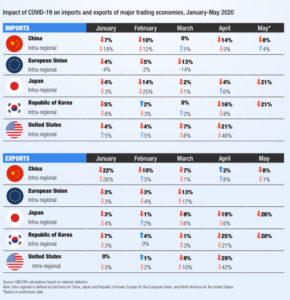 Latest figures released by UNCTAD shows that in April, developing countries in South Asia and the Middle East suffered the steepest decline in exports, while those in East Asia and the Pacific experienced the least reduction in exports.

It indicates that statistics for some of the major economies further reinforces the bleak picture for international trade.

“First, most recent trade figures indicate further deterioration in April and May. Second, except for the first two months of 2020, China appears to have fared better than other major economies. In fact, China’s exports grew by three per cent in April. Still, most recent data for China indicates that such recovery may be short-lived as imports and exports fell by about eight per cent in May. Third, intra-regional trade appears to have declined to a much lower rate for countries in the East Asian and Pacific Regions. For the European Union intra-regional trade has declined at a similar pace as overall trade. On the other hand, United States’ statistics indicate a much stronger decline of intraregional trade,” it added.

At the sectoral level, UNCTAD notes, the pandemic has negatively impacted most sectors. Trade in automotive and energy products is among the worst affected in this second quarter.

“Despite the bruising ti 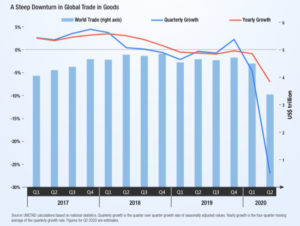 On the other hand, as a result of the pandemic international trade facilitated export and import.  medical supplies. While trade in medical supplies contracted at the onset of the pandemic, it increased in February and March and almost doubled in April 2020, thus contributing to the availability of critical equipment to countries affected by COVID-19, the UNCTAD said.

“For instance, the first two months of 2020 saw that the increase in Chinese domestic demand for such medical products resulted in a strong increase in imports. This demand was largely met by increases in exports from Europe and the United States which were not yet significantly hit by COVID-19,” It added.