May 24, 2020 Politics Comments Off on President inducts Justice Hoenyenuga to Supreme Court 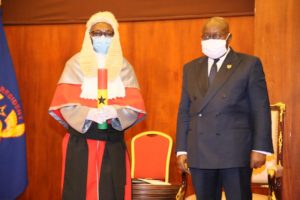 Justice Hoenyenuga has had a career in the Judiciary spanning over 39 years, with the last 15 years spent as a judge on the Appeals Court.

In March, the President nominated him, along with three others, to replace some Justices of the Supreme Court who have since retired.

The four nominees were vetted by the Appointment’s Committee of Parliament, and their appointments were unanimously approved by the Legislature, on Wednesday, May 20.

At a short ceremony at the Jubilee House, Accra, President Akufo-Addo, who administered the Allegiance, Judicial and Secrecy Oaths to Justice Hoenyenuga, congratulated him on his appointment to the apex court.

He said the judge had met the stringent requirements of the Constitution and demonstrated the independence of spirit, proven integrity, high moral character and impartiality of mind to hold the office.

The President told Justice Hoenyenuga that his track record both on the Bar and Bench spoke for itself, saying, “Your appointment to the highest court of the land is as truly well-deserved and merited.”

He expressed the hope that Justice Hoenyenuga, with his experience in high judicial office, would help strengthen the development of the constitutional and other jurisprudence in the Supreme Court, which had developed a positive reputation for many decades.

With all other courts bound to follow the decisions of the Supreme Court in the matters of the law, President Akufo-Addo noted that it was critical that justices of the apex court possessed a sound knowledge of the law.

The situation where judges preferred judgements on the basis of decisions from the lower courts and cited them as law “is not acceptable and even less so when judges cite no authority at all for their rulings and give orders without reason”.

“Judges, more judges of the Supreme court must learned, know their case law, and ensure their decisions and judgements are properly motivated….It is in this manner that judges contribute to the orderly development of the nation,” he said.

However, to Justice Hoenyenuga, the President said though he had a difficult journey during his vetting, ‘happily, you comported yourself in a dignified manner,” and, “I can only urge you to overlook these events, which is only a mere blip on your public career and dispense justice in accordance with your conscience and the rule of law.”

“It is extremely important that you ensure the strict application of the laws of the land and in the words of the Judicial Oath that you have just taken, without fear or favour, affection or ill-will, and therefore without recourse to the political, religious or ethnic affiliations of any citizen of the land,” he admonished.

He expressed confidence that Justice Hoenyenuga would distinguish himself creditably at the Supreme Court.

On his part, Justice Hoenyenuga expressed gratitude to the President and to all other institutions that were instrumental to “granting me this mantle.”

He declared: “I would, to the best of my ability, uphold the faith reposed in me to ensure the 1992 constitution is upheld and for that matter the rule of law. I will, therefore, do my best not to disappoint.”

Justice Hoenyenuga has worked in various capacities, including as an Assistant State Attorney, private legal practitioner, Judge Advocate of the Ghana Navy, Justice of the High Court, additional High Court Judge sitting on many cases in narcotics, robbery and other violent crimes.

He was also the Director of the Remand Prisoners Programme, “Justice for All”.

Mr Justice Issifu Imoro Tanko Amadu, also a judge of the Court of Appeal, Professor Henrietta Mensa-Bonsu, a professor of Law at the University of Ghana, Legon, and President of the Ghana Academy of Arts and Sciences; and Mr Emmanuel Yonny Kulendi, a renowned private legal practitioner are also to be sworn in by the President.

Speaker of Parliament Alban Bagbin, before the House rose on Tuesday night, justified his direction, …