3 weeks ago Africa/International, ICT Comments Off on Global Press Conference incorporated into IFA 2020 in response to COVID-19 pandemic 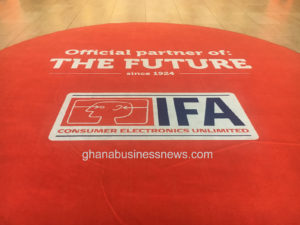 The global pandemic, COVID-19 has left the entire world reeling in all areas of life – social and economic. In response to the pandemic, various protocols have been adopted including the banning of events that host large gatherings – social distancing has been established as one of the means to curb the spread of the virus which has infected more than 4.8 million people in the world with more than 319,000 deaths.

As a result, the IFA Global Press Conference (GPC) 2020 set to have been held in the port city of Larnaca on the south coast of Cyprus in April was cancelled. The GPC brings together more than 350 journalists and technology writers and bloggers from more than 50 countries and industry leaders and innovators in the consumer electronics industry meet and share information on their projects and products.

In a press release copied to ghanabusinessnews.com, organisers of IFA, the largest consumer electronics fair in Europe, indicate that they have been given the go-ahead to hold a real-life event in Berlin based on a special concept that puts health and safety first.

The event won’t be opened to the public, but 1000 people will be allowed per event.

As part of the overall IFA event, the GPC will be part of the four events that will be held together in Berlin, Germany over three days from September 3 to 5, 2020. The events are the IFA GPC, IFA Next and IFA SHIFT Mobility as one event, IFA Global Markets and IFA Business, Retail & Meeting Lounges.

The IFA GPC, which usually takes place in April, has been moved to September and turned it into this year’s Global Showcase for Innovation and Technology, the release said.

“The Global Press Conference will invite around 800 journalists covering 50 plus countries to Berlin, so brands and manufacturers will be able to show journalists their latest products and devices.All keynotes and company press conferences will take place on just two or three keynote stages curated by IFA,” the release said.

The other events are IFA Next and IFA SHIFT Mobility put together into one event. This event will bring together technology start-ups and companies in the connected mobility sector, “to get them the much-needed lifeblood of publicity and industry connections,” the release said.

With brands and retailers striking deals worth more than €4.7 billion during the event in Berlin in 2019, IFA Berlin will curate the IFA Business, Retail & Meeting Lounges to give brands and manufacturers the much-needed opportunity to meet retailers in a safe and efficient manner ahead of the year’s all-important shopping season, the organisers say.

Commenting, Dr Christian Göke, CEO of Messe Berlin, said: “Our IFA team really has pulled out the stops for this one. I’m incredibly proud of how they have tackled this challenge and come up with a solution for IFA 2020.”

“IFA Berlin is the most important event for the consumer electronics and home appliances industry. These past few weeks, we have worked very closely with the IFA team to develop a concept that gives all our industry partners the platform they need to talk about their innovations,” said Hans-Joachim Kamp, Chairman of the Supervisory Board of gfu Consumer & Home Electronics GmbH, the organizer of IFA.

The opening keynote will be delivered by Cristiano Amon, the President of Qualcomm, a company that is the undisputed global leader in mobile connectivity.