May 17, 2020 Politics Comments Off on Election 2020 test of Ghana’s democratic credentials – Nana Frimpomaa-Sarpong 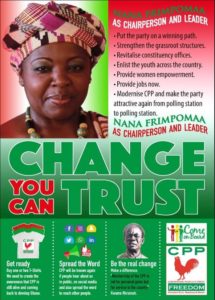 She said Ghana’s electoral system has gone through turbulent times since 1992, but in all cases the nation sailed through and survived.

The current political activities of the New Patriotic Party (NPP) and the National Democratic Congress (NDC) could create electoral violence and antagonism if not checked, she said.

The CPP former Vice Presidential Candidate reiterated the need for governance bodies including the Electoral Commission to create a level playing field for all political actors.

She said the National Commission for Civic Education (NCCE) must also upscale its commitment to ensure that there is peace in the country.

She also appealed to the media to also create an active platform for all political parties to propagate their messages to the electorate.

Nana Frimpomaa-Sarpong noted: “Ghanaians still need to develop the culture of democracy, the courage to resist violation of their human rights”.

The Former CPP Vice Presidential Candidate said the nation needs all actors to adhere to their constitutional mandate, as the Constitution is the only testament to the tenacity of Ghanaians to abide by the rule of law.

On the CPP’s internal politicking, she said, that the party is not for sale to the highest bidder and issued a stern warning to persons who are seeking CPP executive position for their selfish interests to desist from it.

She said the objectives for running for the slot is to work efficiently with executives at all levels to achieve the goals and targets for the CPP.

“Financing remains one of the biggest challenges facing the CPP but that would be a thing of the past as frequent fund raising events would be held to raise the needed funds to drive the CPP back to its past glory”, Nana Frimpomaa-Sarpong said.

The CPP Former Vice Presidential Candidate, who is also an entrepreneur, said the human resources of the party would be harness broadly and reinvigorated to be able to whip up support for the fund raising drive.

She assured party members that, if elected as the party’s leader and chairperson, she will set up a mechanism to mend all cracks in the party and forge a united front in order to brighten the CPP’s chances in 2020. 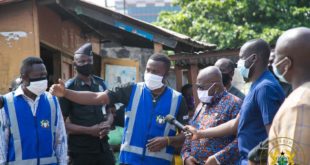 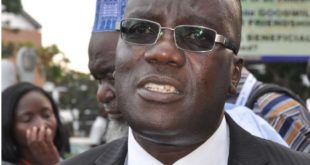