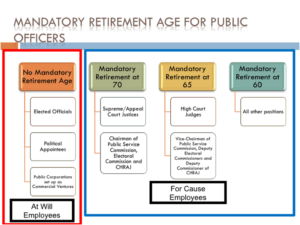 I woke up to the news that the Supreme Court (SC) has decided the Ayine v Amidu case by a 5-2 majority against the plaintiff.

It is good that this matter, albeit delayed, has ended. In a democracy, the Court has the last word and it has spoken. All other views are just that. I would have voted with the minority on grounds that Parliament has no authority to create a public service position that subverts the retirement age scheme stipulated by the Constitution.

The Constitution creates two kinds of public officers, one who can be dismissed only for cause and the other at will. (See chart Attached.) At will, public officers are normally elected or serve at the pleasure of elected officials. They can be dismissed at will either by electors or their appointors. Because their tenure is hazardous at best, the Constitution specifies no mandatory age.

For cause, public officers are normally career officers and can only be dismissed for a good cause. Because their tenure is guaranteed while they act properly, the Constitution sets a mandatory retirement age. Here, the Constitution itself provides that a few in this category must retire at 70, others at 65 and all others at 60. This means unless otherwise included in the 70 or 65 bucket, a for cause public officer must retire at 60.

The Special Prosecutor is a for cause public service position. It is neither elected nor does the occupier serve at the pleasure of the appointors. Plainly, it is just a specialized prosecution position.

In my opinion, just because the Constitution itself allows some for cause public officers to retire at 65 and 70, does not mean Parliament too can create positions that set the retirement age beyond 60 or otherwise effectively upsets the constitutional retirement scheme.

Otherwise, we are in a regime where all Parliament needs to do is to create a Special Professor or Special Nurse position and stipulate that they serve for a 10-year term, which then allows them to be appointed after mandatory retirement for 10 more years.

It is logically unpleasant for a DPP to be retired mandatorily at 60 only to be appointed to another public service prosecutorial position for a fixed term. Whether one is in charge of prosecuting corruption or prosecuting armed robbers should not determine one’s retirement age. At least, that facially absurd regime is not in the Constitution.

Likewise, while the Constitution sets a minimum age of 40 for the President and 21 for an MP, that does not mean Parliament too can start setting its own minimum age limits on public service positions.

To me, all these point to the importance of amending the mandatory retirement law to increase it to 70 while allowing people to voluntarily retire at 60.

COVID-19: When should Ghanaians expect cases to start declining, as current number rises to 4,700?

Since Ghana announced the first two confirmed COVID-19 cases on March 12, the country as …