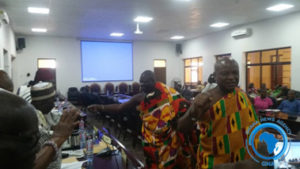 The National House of Chiefs is constituting a team to embark on a nationwide outreach programme to preach peace among all Ghanaians ahead of the December general elections.

Togbe Afede XIV, President of the House, who announced this said the Standing Committee was fashioning out the modalities of the programme to ensure its successful implementation from April, this year.

Addressing the first ordinary meeting of the House for this year in Kumasi, he said members of the House were very much concern about the rising tension on the political landscape ahead of the December elections.

Togbe Afede said chiefs had a role to play to reduce the political tension currently building up in the country, and that was why the House had decided to embark on the outreach programme to preach peace to the people.

He said the people continued to look up to chiefs for peace and development since politicians were failing them.

It was therefore important for present chiefs to build on the heritage their forebears left and be courageous to provide the leadership that would sustain the sacred image of the chieftaincy institution, he said.

Togbe Afede stressed the need for all stakeholders in the December elections to play their roles responsibly to ensure that the elections were conducted in a peaceful, transparent and fair manner.

He appealed to chiefs to close their ranks and work in the pursuit of the best interest of the institution and the nation as a whole.

Minority walks out of Parliament over lack of quorum