March 6, 2020 Politics Comments Off on NDC supporters in Agona East defect to NPP 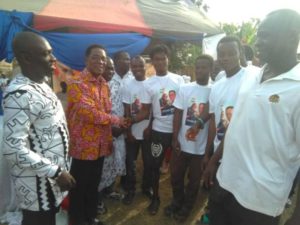 Thirty supporters of the National Democratic Congress(NDC)at Mankrong-Junction Zongo in the Agona East Constituency have defected to the New Patriotic Party (NPP).

Mr Aremeyaw Mohammed, leader of the defectors said their decision to join NPP was informed by the massive development within three years of President Akufo-Addo’s government.

The defectors were introduced at the inauguration ceremony of Agona East Constituency Loyal Ladies (women’s wing) of the ruling party at Mankrong-Junction.

He said the ruling government had done far better than the NDC administration especially the numerous social Interventions like the free Senior High school (SHS), which gave children from poor backgrounds the opportunity to access secondary education.

The leader said the fragile economy inherited from the opposition NDC was reversed and now Ghanaians were reaping the benefits of good governance.

Mr Mohammed said the revival of National Health Insurance Scheme, massive educational infrastructure for both Basic and SHS within three years government under New Patriotic Party were all evidence of good governance.

He said the good works of Professor Kwesi Yankah as Parliamentary Candidate had inspired and encouraged them to join the Party.

Mr Mohammed said the defected supporters would never retreat or renounce its pledge to rally solidly behind Prof Yankah and President Akufo-Addo to continue their good works for the people of Agona East.

Prof Yankah,Minister of State In-charge of Tertiary Education was joined by Mr Dennis Armah-Frempong, DCE for Agona East and party officials of the constituency to welcome the NDC defectors and assured them that NPP would never betray or abandon them.

He said NPP remained the biggest visionary political party in the Country and they should not see themselves as strangers, but full members of the party machinery for good.

“We have 10 more months for Ghana to decide on who should be the next President and hoped that Nana Addo Dankwa Akufo-Addo would be retained as President in December 7 polls”.

Prof Yankah urged Mr Mohammed and his group to join hands with the party to help make Ghana a better place for all.