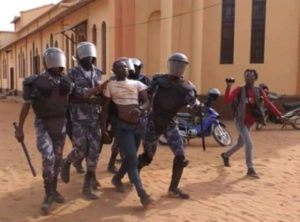 Security forces in Togo have used force to disperse protesters who defied government warning to take part in a protest march in the capital, Lome.

The demonstration was to register their displeasure with the announcement of incumbent President Faure Gnassingbe as winner of February 22 Presidential Election and call for recount of the ballots.

The armed men on Friday evening, used tear gas on those who gathered at a location near Saint Joseph College in Lome, to embark on the demonstration and chased others on foot, compelling the demonstrators to flee bringing the march to an abrupt end.

“Agbéyomé is our President, we want change” was the cry of the protesters despite the sounding of detonations of tear gas canisters.

The police on foot and the military in jeeps, then, moved to occupy every space dispersing the crowd with force.

Several demonstrators were injured with some arrested and taken to unknown destinations.

A protestor who preferred to be called Kodjo Bullet and agreed to speak to the Ghana News Agency (GNA) and said, “but what are they afraid of, If Faure Gnassingbé won as they claim, let the people demonstrate freely, but as in any dictatorship, they rely on military force to control the population. It is only the beginning of the beginning. Togo is not a Kingdom. No to the 4th mandate,” he added, sweating profusely as he manouvred to avoid being spotted by the police.

Government, a day earlier through a communiqué warned that the planned protest march was illegal and warned citizens from taking part in it, adding, security forces would be deployed to uphold the law.

Government carried through its threat of security deployment to uphold the law by keeping key leaders of the march under house arrest and later proceeded to disperse those gathered for the walk.

The homes of Dr Agbéyomé Kodjo, former Togolese Prime Minister and the main opposition candidate in the just-ended Presidential Election and, Bishop Philippe Kpodzro, an 89-year old critic of Gnassingbé, remained under tight security surveillance the whole of Friday preventing exit and entry to their homes.

This was after Dr Kodjo charged followers of his Party, Patriotic Movement for Democracy and Development (MPDD) and citizens of Togo who believed their choice of a president through the ballot was disrespected, to come out in their numbers to protest against the provisional results announced by the country’s electoral body, CENI.

The announcement by CENI brings to fourth term, Mr Gnassingbé’s rule since coming into office in 2005, following the death of his father, Gnassingbé Eyadema who ruled Togo for 38 years.

The former President of Liberia, Ellen Johnson Sirleaf, is to co-chair with the ex-Prime Minister …