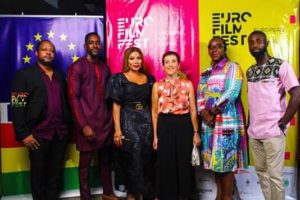 The European Film Festival has for the first time been held in Accra, as both the European Union (EU) and Ghana share ideas in developing ways to revive the local film industry.

The festival organized under the auspices of the Delegation of the European Union to Ghana, would see 10 award-winning European feature films and 25 selected short films from Ghana screened during the week-long festival.

Speaking at the official opening of the European Film Festival at the National Theatre in Accra, Her Excellency Diana Acconia, the EU Ambassador to Ghana, said the festival acts as a platform for culture exchange, inspiration and partnership.

“The film festival gives us the opportunity to showcase the beautiful European cinematography in Ghana and with this festival you would see the diversities in European culture.

“We also selected some short Ghanaian films in order to give young Ghanaian film makers the opportunity to showcase their work and also get support in the production of their movies,’’ she said.

She added that, the EU would explore others areas such as arts and fashion as they look to share cultures and strengthening ties with Ghana.

Mr. David Dontoh, President of the National Film Authority, in his remarks said, “This festival is one great things that have happened to the film industry in Ghana and across the sub region. Film of course is a powerful medium that help create tourism, cultural exchange, and diplomacy, among others.

“The European film festival has come at an opportune time where stakeholders would have the chance of viewing productions from Europe as well as local productions,’’ he said.

He however highlighted the challenges that confronted the industry as they were working hard to help Ghanaian films stand on its feet especially with events such as the European Film Festival.