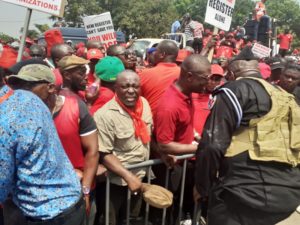 Members of the Inter-Party Resistance against the New Voters Register, on Tuesday, held its third demonstration, in Accra, to protest the Electoral Commission’s decision to compile a new roll for the December General Election.

The first and second demonstrations were held in Tamale and Kumasi, respectively.

The members were clad in red t-shirts, head and hand bands, and carried placards with various inscriptions including: “No new register”; “New voters register is needless”; and “Don’t waste money on new voters register”.

The group is made up of the opposition National Democratic Congress, the People’s National Convention (PNC), All People’s Party (APP) and some smaller parties.

They marched from the Kawukudi Park to the El-wak Stadium through to the cantonments, to the Jubilee House, and finally reconvened at the Electoral Commission’s (EC) headquarters.

Mr Bernard Mornah, the PNC Chairman, who presented a petition to Mr Lawrence Sarpong, the Acting Director in charge of Administration, EC, said the Commission had not given any acceptable reason for the compilation of a new voter’s register.

He said the existing register was credible, therefore, the taxpayer’s money should not be used to compile a new one.

Mr Mornah called on all to join the group to resist move of the EC with the backing of the Government.

Mr Hassan Ayariga, founder, All People’s Party, said the exercise was needles since the existing register had been recently used to elect Assembly and Unit Committee members across the country.

The same register was used to elect the current President in 2016, he said, hence, the register could not be described as unfit for the 2020 elections.

The EC, however, has explained that the integrity of the 2020 polls could be undermined if a new roll and a new Biometric Voter Management System were not deployed.

In an earlier statement, the EC said: “The current kits and solutions are obsolete: They have reached end of life and can no longer be supported by their Original Equipment Manufacturers”.

Mr Sam George, a member of the Group, rejected the EC’s position alleging, a new register with 10 months to the general election was only an attempt by the EC to manipulate the voters register for the governing New Patriotic Party (NPP).

Parliament has, however, approved GH¢390 million as the EC’s budget for the exercise.