The surviving driver of the Dompoase accident which claimed 34 lives was on Friday denied bail by a Cape Coast Circuit Court.

The accused, Mark Mireku, 45, pleaded not guilty to the charge of dangerous driving and would make his next appearance on Monday. February 10.

Mireku’s was first arraigned when he was discharged from the hospital on Thursday, January 17.

However, when he appeared before the Magistrate court on Friday, January 31, his Lawyer, Mr John Benson raised an objection with the reason that the Magistrate’s court had no jurisdiction to handle the case.

The court therefore discharged Mireku, but he was immediately re-arrested and brought before the Circuit Court, presided over by Mrs Dorinda Arthur Smith.

Prosecuting, Chief Inspector Oppong Twumasi, said Mireku was driving a Hyundai Bus with the registration number (GN 3780-10) with passengers travelling from Accra to Takoradi when the accident occurred. 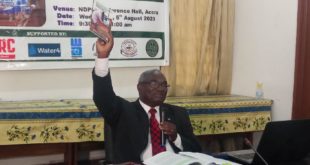