Home / General News / I am spiritually bonded with Dagbon – Kufuor

January 21, 2020 General News Comments Off on I am spiritually bonded with Dagbon – Kufuor 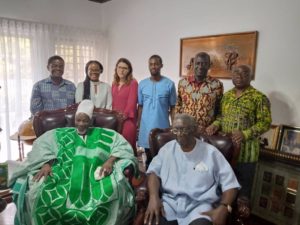 Former President, John Agyekum Kufuor has indicated his strong ties with Dagbon and its people, saying the great ancient Kingdom deserves the support of all in Ghana to restore the area back to its former glory.

Eulogising the chiefs and people of the Dagbon Kingdom at his residence in Accra during a courtesy call on him by, Ya-Na Abukari Mahama II, former President Kufuor praised the people of Dagbon for their resilience and efforts in rebuilding the Kingdom after the sad incident that befell the traditional kingdom in 2002.

He therefore pledged his continuous support for the people of the area in their quest for peace and unity in Dagbon.

Former President Kufour said: “I set-up the Wuaku Commission, which did a fairly good job and I prayed many times on the issue until God revealed to me to tap the wisdom of these three great kings to help me resolve the issue”.

He said when God revealed to him to set up the Committee of Eminent Chiefs, he realised that the decision was also in tandem with the long history of the kingdoms involved.

“The Nayiri is the senior brother of Ya-Na according to tradition and Asanteman also has a long historic links with Dagbon, so it was perfectly well to solicit their wisdom and support in solving the problem’’, the former President hinted.

The former President expressed his happiness that the Dagbon people now have a Ya-Na and pledged his support for Ya-Na Abukari II and the Kingdom to succeed.

The former President also commended President Nana Addo Dankwa Akufo-Addo for his strong support for the cause of the Dagbon peace process.

Ya-Na Abukarii II thanked former President Kufuor for his wisdom and support for the people of Dagbon during their hard times.

He described the former President as the architect of the current peace in Dagbon after the demise of the late Ya-Na, due to his wisdom in setting-up the Asantehene led Committee of Eminent Chiefs, which produced the current peace.

According to the Ya-Na, “former President Kufuor deserves our respect and praise for his fatherly wisdom in establishing the Committee of Eminent Chiefs’’.

The Overlord told the former President that he was working to unite the people of Dagbon at this stage to bring real meaning to the peace process and that won’t happen overnight due to the long years of disturbance in the area.

“Your excellency, over the past year as leader of Dagbon, I am pre-occupied with the business of uniting our people and engendering the building blocks of peace for lasting peace and unity in Dagbon.

“This arduous task requires a lot of support and wisdom from people both within Dagbon and outside it’’, he said.

He therefore indicated that he would count on the support and wisdom of the former President whenever it was necessary.

Ya-Na Abukari II thanked the Foundation and Mountcrest University for the honour and indicated that the scholarships marked another great chapter in their relations.

He commended the former President and Mountcrest University for the scholarships indicating ‘’it will leave an indelible mark on this visit and the students would become useful citizens for our country in the future’’, he said.

GES assures public of safety ahead of re-opening of schools