January 19, 2020 General News Comments Off on Poor road network, a threat to success of PFJs – Farmers 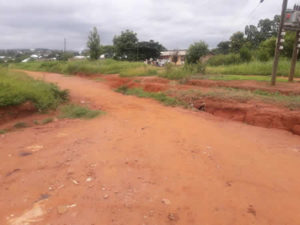 Some farmers in Bawku have expressed worry over the poor road network which is making it difficult to access their farms and also transport farm produce for storage and market saying it is a threat to the success of the Planting for Food and Jobs programme.

Perishable food crops such as tomatoes, pepper, cabbage, lettuce and onion are vulnerable to the weather and spoil easily.

The farmers in an interview with the Ghana News Agency (GNA) in Bawku, said bush fires, stray and wild animals and unexpected rains has destroyed some of the crops harvested in November and December 2019, which were left on the farms due to lack of transport and storage facilities.

The farmers said even though they had good harvest last year most of their farm produce was lost to bush fires as they were not able to transport the food crops to the market and their houses for storage.

“Vehicles cannot access the farms to convey our farm produce to the market for sale and this is leading to lot of loses”.

At Kolnaba in the Pusiga District, the Kolnaba Vegetable Farmers Association, said they might not be able to transport their vegetables to the market because there are no roads linking their farms and communities to the nearest market in the district capital.

Dry season vegetable farmers in the Bawku area are presently busy growing vegetables by irrigation and have started harvesting for the market.

Mr Mohammed Paeda and Mr Alhassan Tongim, both vegetable and staple crop farmers at Kolnaba, said their community has been cut off from Pusiga, the District capital, by the White Volta River and they are not able to transport their wares to market centres in Pusiga, Bawku and Bolgatanga.

“Our vegetables such as cabbage, lettuce, tomatoes and pepper among others get rotten on the farms when we are unable to transport them in time to the market”, the farmers said.

At the Jentiga farming community in the Bawku municipality, onion farmer groups registered their displeasure on the road linking their community to Bawku saying some farmers are pulling out of the onion farming business as they could not transport their produce to the market for sale.

Onion farmers at communities such as Akara and Bugri in the Tempane District and Atuba and Bansi in the Binduri District, expressed frustration over the issue and appealed to the district assemblies to rehabilitate some of the feeder roads that would enable them access their farms.

They reiterated that poor road network could be a threat to the success and sustainability of government flagship programmes such as the Planting for Food and Jobs among others.