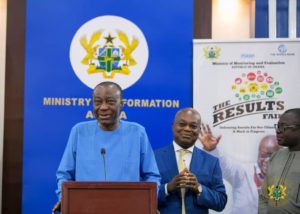 The government will hold the first ever Ghana Results Fair to highlight its interventions from January 14 to 16 at the Accra International Conference Centre.

Dr Akoto Osei, the Minister of Monitoring and Evaluation (MoME), who announced this at a press launch of the Fair in Accra on Thursday said it would offer agencies and Ministries implementing the 17 priority areas to tell their stories.

In each of the booth, the participating agencies would display info graphics, pictures, videos and relevant information of projects, where they started, the processes involved, level of implementation, sustainability and its short, medium and long-term impact.

The three-day event, which is being organised by the MoME in collaboration with the Ministry of Information, is on the theme, “Delivery Results for Citizens Work in Progress”.

The government under the World Bank funded Public Sector Reform for Results Project is sponsoring the Ghana Results Fair.

Dr Osei said the fair was one of the efforts by government to promote inclusive engagement and interactions between the public sector and the citizenry to promote evidence-based decision-making and improve accountability for results.

Since 2017, he said the Ministry had worked with the Ministries, Departments and Agencies and other institutions to strengthen the foundation for effective generation and use of monitoring and evaluation (M&E) information for management of ongoing programmes and for policy and decision-making.

He said the MoME had established a network of M&E Focal Persons across 33 MDAs to deepen and sustain the generation and use of M&E information to guide the delivery and impact of their polices, programmes and projects.

He said it had co-organized with the International Centre for Evaluation Development the first “Evidence to Action” Conference in Ghana to promote the use of evaluation evidence for decision- making.

He noted that the Ministry had built the capacity of 25 MoME staff and M&E Focal Persons in data collection, analysis and reporting and evidence gap mapping.

Mr Asibey said the Ministry was investing more into evaluating the performance and impacts of the Government Flagship Programmes and was developing a dashboard for data storage and dissemination.