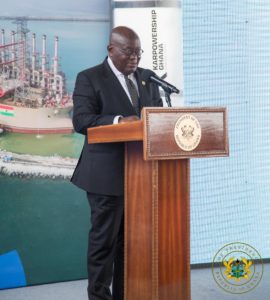 President Nana Addo Dankwa Akufo-Addo has commissioned the usage of gas from the Atuabo Gas Processing Plant to power the relocated 450 megawatt Karpowership at the Sekondi Naval Base in the Western Region.

The conversion of the Karpowership from heavy fuel oil usage to natural gas for power generation is expected to save the country a monthly take-or-pay cost of $40 million and projected annual savings of $480 million.

At a valve-opening ceremony on Saturday, President Akufo-Addo said the conversion was in line with his Government’s overarching plan of promoting the use of gas as the primary fuel for power generation in the country.

He said the switch was to ensure the maximum utilisation of indigenous gas in the Western Region to reduce, and to eventually eliminate, the financial consequences under the take-or-pay obligation of the Karpowership Contract.

“The arrangement that we have made with the companies is that the gas that comes out of the ground belongs to us. We are not paying for it. If it is ours, we should use it,” he said.

With the development, Karpowership will take approximately 50 per cent of the volume of the take-or-pay Sankofa gas for power generation over the remaining period of the Power Purchase Agreement (PPA).

Specifically, the switch of the Karpowership to natural gas would save electricity users an amount of $170.5 million per year, and a projected amount of $1.2 billion over the remaining term of the Contract, by way of reduced electricity charges to consumers.

Noting further the gains to be made by the arrangement, the President said using gas as the primary source of power generation would post significant returns for the country over the next decade.

Moreover, the use of gas, he noted, would bring down the cost of electricity and, thus, provide a secure and cheaper source of powering the economic and industrial growth of the country.