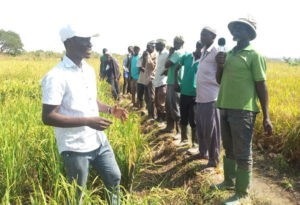 These varieties have qualities such as early maturing, high yielding, good grain quality, aroma and tolerant to diseases and pest encountered by rice farmers in the country.

Dr Maxwell Asante, a rice breeder at CSIR-CRI, who led a team to realise these varieties collaborated with Dr Samuel Oppong Abebrese of the CSIR-SARI to introduce the varieties to farmers and extension officers in the north.

The field day was to showcase to the farmers the qualities of the varieties alongside the good agronomic practices to be adopted by farmers such as good leveling, nutrient and water management among others to obtain higher yields.

It was also to enable the farmers observe, share their views and make their preferred choice among the three improved rice varieties.

This work is part of a project led by the West Africa Centre for Crop Improvement (WACCI), University of Ghana and Crops Research Institute with funding from African Union and the European Union.

Dr Samuel Oppong Abebrese, a Rice Breeder with the CSIR-SARI addressing farmers on the field, said the field trip was to help farmers compare and make their preferred choice of rice varieties in order to enable the CSIR-SARI make the seeds readily available to the farmers for cultivation.

He elaborated that, the varieties were planted alongside AGRA Rice, a rice variety farmers have been cultivating over the years and said it is used as a bench mark for the farmers to compare with the three new varieties.

He added that CRI-Kantinka has a yield potential of about 8.5 tons per hectare, aromatic and matures within 115-120 days.

He advised the farmers that cultivating the varieties goes with adopting good agronomic practices such as leveling of fields before cultivation, nursing and transplanting the single seedling within a spacing of 20 cm by 20 cm instead of broadcasting, as well as ensure proper irrigation and appropriate fertilizer application among others.

He called for conscious efforts between government and other stakeholders as well as the citizenry to help encourage patronage and consumption of locally produced rice through improved marketing and branding.

Majority of the famers, after examining the varieties, showed high interest in the qualities contained in CRI-Dartey compared to the other two varieties introduced.

Mr Mohammed Issahaku Alhassan, a farmer in Botanga, said though the three varieties were doing well in terms of yield, he preferred the CRI-Dartey Rice variety since it had higher yielding potential of about 9 tons per hectare and could compete with the AGRA rice if introduced onto the market.

“Some of us are seed growers and we have been using AGRA and Jasmine rice to farm but now with the introduction of the CRI-Dartey and the other two, I have realised that there is a potential of high yield and can compete with AGRA rice especially the CRI-Dartey rice ” he said.

Mrs Salima Abdullai, said she started farming for three years now but comparing the AGRA rice and the other three rice varieties, she preferred CRI-Dartey Rice because it had brighter and healthier grains as compared to the other varieties.

She, however, said women farmers in the community were faced with the lack of finance, which affected their engagement in larger rice farm production and appealed for support.

Mr Adam Mahama, also a farmer, however, said he preferred the CRI-Kantinka to the other two varieties considering its aromatic content, high yielding and grain quality.