The Board of Trustees (BoT) of the Health Sector Occupational Pension Scheme (HSOPS) has assured its contributors that they are reasonably ready to take over payments of lump sum come January 2020.

Dr Derek Amoateng, the Chairman of the Board of Trustees of the Health Sector Occupational Pension Scheme, gave the assurance at the commissioning of the Scheme’s temporary secretariat located on the premises of the Greater Accra Regional Office of the Ghana Registered Nurses and Midwives Association’s (GRNMA) at Korle-Bu, near Zoti Junction, Accra.

He said these lump sum payments, would consist of past credit of contributors held by the Social Security and National Insurance Trust (SSNIT) prior to January 01, 2010 contributions in Temporary Pension Fund Accounts (TPFA), which has been ring-fenced and would soon be allocated to members, and direct contributions received from the Controller and Accountant-General’s Department and the facilities since 2016.

Dr Amoateng  said the HSOPS Board, was inaugurated together with other boards of government barely two years ago with a clear mandate to ensure the smooth implementation of the tier two component of the new three-tier pension scheme in Ghana, and tasked with building on the foundation already laid by preceding BoTs, as well as the various unions in the health sector, government, NPRA and other stakeholders.

The HSOPS Board has since then worked hard by reviewing and strengthening the existing systems in the scheme and setting new ones with the overall focus on securing and growing retirement income for health workers, he said.

He said the “TPFA as transferred to us in December 2017 continues to make impressive gains,” and that the Board was actively working with the National Pensions Regulatory Authority (NPRA), government  and other stakeholders, to finalise the data on TPFA in order to allocate the funds and make them accessible to members beginning from January 01, 2020.

He appealed to the NPRA and the Ministry of Employment and Labour Relations for enhanced engagement and to finalise with SSNIT on a possible harmonization of payment of the various components of the lump sum, to ensure that contributors received substantial lump sum to give credence to the pension reforms.

Dr Amoateng however thanked the GRNMA and the Ministry of Health for the tremendous support over they over the years, and said being very mindful of its responsibility to implement the tier-two pension in January 2020 pursuant to provisions of the National Pensions Act 2008 (Act 766) as amended, the Board of Trustees, found it absolute necessary to have its own office space where contributors may freely visit and transact business, while it advance plans to secure a parcel of land for a permanent office complex for the scheme.

He said the HSOPS has since its inception in 2012, been operating from an office space within the GRNMA headquarters at Shiashie in Accra, but the new facility though a fabrication, has the potential to last for many years, and has been well fitted to meet its purpose, adding that permanent staff have also been recruited and given the necessary training to begin running the office.

Mr Bright Wireko-Brobbey, the Deputy Minister of Employment and Labour Relations, commended the BoT of the HSOPS for the achievements so far and encouraged it to sustain its momentum, stressing on the important contribution of pensions in the lives of the Ghanaian worker.

He said as at the end of 2018 the pension industry in Ghana was worth 22 billion Ghana Cedis, making up 7.41 per cent of the rebased gross domestic product, having risen from 6.9 billion in 2013.

He said “these are exciting times for the pensions industry and every needed attention is being given to it to ensure steady, persistent growth to secure the lives guarantee livelihood sustainability for our retirees,” and urged all other sectors particularly the informal and private, saying, “everyone need pensions to rely on when active work is no longer possible”.

Mr Wireko-Brobbey said the government would continue to provide the convenient environment to safeguard pensions to strongly encourage growth for the sector.

Pension issues must be handled by Labour Ministry, not Finance – CLOGSAG 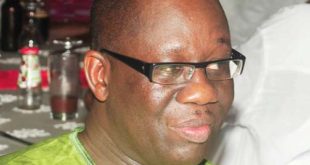