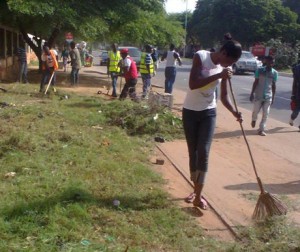 The New Juaben South Municipal Chief Executive (MCE) Mr Isaac Apaw Gyasi, has indicated that the Assembly would begin to crack the whip on those who dump refuse at unauthorised places.

He said all efforts by the assembly to improve sanitation in the area is not working, hence people should be punished and held responsible for their acts, to serve as deterrent according to their bye-laws.

He warned that “anyone, caught dumping refuse at unauthorised place or littering the streets will weed that particular area for a month.”

Speaking at the second session of the Assembly’s meeting in Koforidua, he noted that the Municipality continued to face huge challenges in managing both liquid and solid waste, adding that not even the presence of Zoomlion in managing waste in the area and the institution of the monthly communal clean up exercise, had yielded the expected results and called for concerted efforts to be able to tackle the issue holistically.

He said the Assembly as a first step, will provide dust bins at vantage points throughout the area and intensify the monthly clean up exercises, to ensure that everybody in the Municipality took part.

The MCE also noted that, the sub-structures of the Assembly were very weak, especially the zonal councils, making it difficult for the Assembly to meet its revenue targets. He added that the role of the zonal councils were not felt, as well as in other areas such as sanitation, where they could mobilise the people to understand the need to adhere to the sanitation rules.

He appealed to the Assembly members, to support the agenda of making the sub-structures work according to purpose, to provide the enabling environment to enhance the citizens’ participation in governance and development.