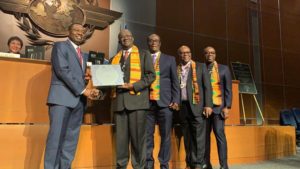 The President of ICAO, Olumuyiwa Bernard Aliu, presented the awards to Mr Kofi Adda, the Minister of Aviation, at the organisation’s 40th Assembly, which is underway in Montreal, Canada.

With the Minister to receive the award were the Director-General of the Ghana Civil Aviation Authority, Engineer Simon Allotey, Ghana’s High Commissioner to Canada, Nii Ayikoi Otoo and the Managing Director of the Ghana Airport Company Limited, Mr Yaw Kwakwa.

Mr Olumuyiwa in his address, emphasised the importance for all stakeholders to work together to maintain safety in the aviation space.

“It is important for us to continue to remind ourselves that even in the era of innovation, Aviation safety, security and sustainability must remain our most fundamental priorities,” he said.

The safety award was given to Ghana in recognition of obtaining
Africa’s highest score in Aviation Safety Oversight with a provisional Effective Implementation (EI) rate of 89.89 per cent.

The award for security is in recognition of the country’s high commitment to ICAO’s recommended standards and protocols on Security at the Airport and the Ghana Airspace.

Overall, 16 certificates were awarded for safety and 17 for security to some member states of ICAO in recognition their improved safety and security standards.

Mr Adda said the awards were a great achievement, which rewarded hardwork and perseverance.

The aviation sector, he said, held a lot of potential for developing the economy.

“Aviation holds a lot to transform our lives. The socioeconomic benefits are there but all of these come on the back of maintaining the safety and security side of things, which we’ve been able to achieve”.

The ICAO council president certificate award in Aviation security was instituted in support of the ‘No country left behind’ initiative by the body.