A bridge across River Congo: Connecting capitals, connecting the continent

September 19, 2019 Africa/International Comments Off on A bridge across River Congo: Connecting capitals, connecting the continent 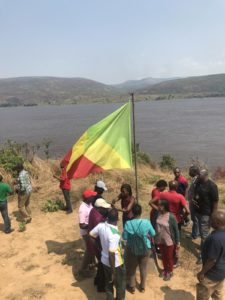 From the iconic and beautiful Route de la Corniche in Brazzaville, capital of Congo Republic, the lights of Kinshasa, capital of the Democratic Republic of Congo just across the Congo river beckons you alluringly. Only eight kilometers separate these two capital cities but they are eight very long kilometers.

Commuting between both cities is not exactly easy. It entails taking boats and ferries to traverse the river. Getting goods across also takes the same rigorous process. This is how the people of these countries which both take their names from the river – which ironically separates them – have lived for decades.

Kinshasa and Brazzaville have a combined population of about 13.8 million but this huge “asset” has been largely latent. They have not been able to leverage on their population and energies substantially for mutual social and economic gains.

Despite decades of planning, no bridge has been constructed to connect both cities. Now, through the initiatives and collaboration of both countries, the regional community and continental institutions, one is about to be built.

The dual-purpose rail road bridge to provide “safe connections” will however be located much further down the river in Maloukou Trechot, a community about sixty-five kilometers from both capital cities.

Eleli Alain Alfred from The Republic of Congo’s Ministry of Town and Planning explains that the choice was informed by technical, strategic and cost considerations. These include the width of the river at this point and the fact that both countries have strategic economic zones on their respective sides of the area.

The rail road bridge will have about ten kilometers of connecting roads with one stop border posts on either end. The cost of the project has been put at about $550 million. The project is now being structured by Africa50 an infrastructure investment platform established by the African Development Bank to focus on high impact national and regional projects. The project is scheduled to take off in 2020.

The rail-road bridge will be fed into another more ambitious project; the 840 kilometers Kinshasa-Ilebo rail project which is intended to improve the rail network across Africa for cheaper and easier movement of persons and goods.

There is continental interest in these projects because they form part of the transport infrastructure being developed to connect Africa. The Brazzaville-Kinshasa bridge is the missing link in the Trans-African route TAH3 road corridor from Tripoli to Windhoek-Le Cap, which will be crucial to continental integration.

It is one of the priority projects of the Programme on Infrastructural Development in Africa (PIDA) of the African Union and its partners which has become the continental vehicle for accelerating the delivery of public infrastructure across the continent in four major sectors including the transportation sector.

Under the first phase of PIDA, there are a total of four hundred priority projects at various stages of implementation. These include regional priority projects such as the Kazungula bridge linking Botswana, Zambia, Zimbabwe and Namibia as well as the Abidjan-Lagos corridor.

At the 2018 PIDA week in Victoria Falls, Zimbabwe, Ibrahim Mayaki, Chief Executive of the African Union Development Agency (AUDA-NEPAD) stressed over and over again the need for an integrated Africa with connected markets, people and services for the prosperity projected for the continent to cascade down to the people.

Improved transport infrastructure is expected to facilitate this connection, stimulate trade flows and fast-track the goal of economic integration on the continent, especially with the African Continental Free Trade Area (AfCTA) now virtually a done deal.

Africa50 says with improved transport connections between Brazzaville and Kinshasa, traffic which is currently estimated at “750,000 people and 340,000 tons of freight a year, is projected to increase to over three million people and two million tons of freight by the year 2025”.

Flowing from this, nearness will soon have a more beneficial meaning for the people of the two nearest capital cities in the world with more explicit social and economic expressions. From the Route de la Corniche in Brazzaville, the lights of Kinshasa may no longer be so near and yet so far away by the year 2025.

This is why high impact PIDA projects are exciting attention from Lagos to Addis Ababa. Cape to Cairo.