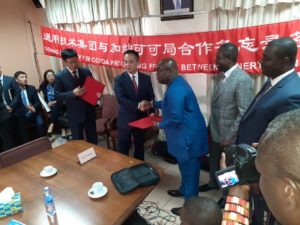 The Ghana Cocoa Board (COCOBOD) on Tuesday signed a Memorandum of Understanding with the China Development Fund and Genertec International Corporation to establish a cocoa processing plant at Sefwi Wiawso in the Western region.

The project earmarked to start in early 2020, is estimated at a cost of $100 million to increase the country’s total capacity of cocoa production.

Mr Joseph Boahen Aidoo, the Chief Executive Officer of COCOBOD speaking at the signing ceremony, said it was the policy of government to increase the production of cocoa beans by adding value to the product to be competitive in the emerging world market.

He said government objective was to ensure that waste from cocoa beans that accounted for 20 per cent of the total volume was converted into organic substance for domestic use.

The Chief Executive Officer said the factory, when completed, would benefit cocoa farmers, open rural economy for the community and strengthen the cocoa supply chain.

He said the country was hoping to expand its production from 850,000 metric tons to 1.5 million in the long term.

Mr Aidoo said the project is a sino-Africa model, the first of its kind in the Africa region, hence, the need to welcome the collaboration for a sustained mutual benefits.

He said discussions on the project started about two and half years ago and was excited to witness the signing ceremony as way of exploring business opportunities for the two countries.

He mentioned that Ghana was the second larger producer of cocoa beans in the world and the number one producer of premium cocoa globally, calling on all to support for the success of the facility.

Mr Zhou Qingyu, the Vice President of China Development Fund welcomed the collaboration and said both countries have enjoyed long-lasting relations, hoping to continue with the friendship for the benefit of all especially the cocoa farmers.

He pledged their unflinching support to work with government to ensure that the necessary documentation starts as early as possible for the project to begin as expected.

Mr Zhou Mingchun, the Vice President of Genertec International Corporation said Ghana was regarded as the regional hub in trade facilitation, hence, the need for China to set up businesses in the country.

He was optimistic that the project would be successful and sustainable to revitalise the cocoa industry.

Present at the signing ceremony included Mr Hackman Owusu-Agyemang, the Board Chairman of COCOBOD and Dr Emmanuel Agyemang Dwomoh, the Deputy Chief Executive in charge of Agronomy and Quality Control, COCOBOD and Mr Shi Ting Wang, the Chinese Ambassador to Ghana.

Finding a cure while dealing with reality – Healthcare in Ghana