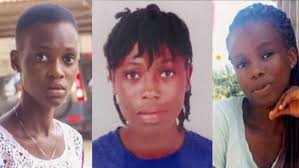 Mr James Oppong-Boanuh, the Acting Inspector General of Police, has confirmed that the DNA test conducted on human remains, suspected to be the bodies of the four missing Takoradi girls has turned positive and therefore confirms their death.

He said the Police Service has informed the families of the outcome of the test and that, the remains were those of Ms Ruth Abaka, Ms Priscilla Blessing Bentum, Ms Ruth Love Quayson and Ms Priscilla Kuranche.

The Acting IGP announced this at a news briefing in Accra.

He said the investigations also established that the girls were victims of a serial kidnapping and murdering syndicate that operated in the Takoradi area.

Mr Oppong-Boanuh said following investigations into the case, on August 2, 2019  the investigation team re-examined all available facts associated with the matter, while suspect Samuel Uduatuk’s residence in Takoradi was searched.

He said on August 5, a joint team of crime scene investigators and forensic laboratory experts from the Police headquarters led by the Western Commander together with suspect Uduatuk, visited an uncompleted residence.

According to him, a detailed search of a previously unexamined septic tank resulted in the discovery of materials suspected to be human hair.

He said a subsequent draining of fluids from the tank revealed three human heads at the bottom of the tank and bones suspected to be human remains were retrieved from the septic tank together with two sets of earrings and fingernails with artificial teeth.

The Acting IGP said the National Fire Service was engaged to empty the well which led to the discovery of a human skull which was fresher than the three found in the septic tanks.

He said the Police service commended the investigative team for successfully arresting the perpetrators of the heinous crimes, adding that their intelligence work led to the arrest of other suspects in foreign jurisdictions like Nigeria.

He encouraged the public to endeavour to report suspected crimes to the police immediately as they happen.

“The Police remain committed to protecting and serving the citizenry and will at all times ensure that the safety of the public is preserved”, he added.

He added that the suspects would be processed for court upon completion of the case docket and advice from the office of the Attorney General.

Zipline appoints Bono to its board