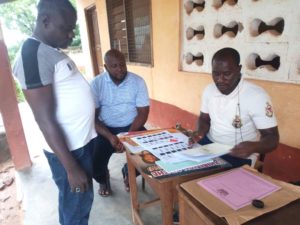 Some polling station officers in the Tamale Metropolis have expressed worry over low turnout of voters in the ongoing week-long voter registration exhibition exercise being carried out by the Electoral Commission across the country.

Visits by the Ghana News Agency (GNA) to some polling centres in the Metropolis revealed that the exercise, which started at about 0700 hours, was poorly patronized as only handfuls of registered voters had come to confirm their voter details at various exhibition centres.

The activity, even though is receiving low patronage, is progressing smoothly as some party agents are voluntarily monitoring the process.

He said he had marked four male voters since 0715 hours and was hoping that more would turn out by the close of day.

Madam Alhassan Nazifa, an Exhibition Officer for Polling station ‘A’ at the OLA J.H.S registration centre said turnout was very poor, “As at 0800 hours, I have only marked one voter from this centre,” she said.

Madam Yussif Zenab Maltiti, an exhibition officer for polling station B at the Kukuo A.M.E Zion J. H. S. registration centre, said she had only confirmed five voters in the register that contained 687 voters as at 0900 hours.

Mr Abubakari Wuntimah, Exhibition Officer for the Kukuo Roman Catholic Church Registration Centre, said he had recorded about 82 voters and the exercise was moving smoothly.

He, however, said he had recorded one female whose name appeared twice in the register.

Mr Nuhu Abdul Rahman, a registered voter at the Kukuo R/C Church registration centre, who had cross checked his details, said “so far the process is going on well and I am happy my details are still the same on the voter register “.

The GNA observed that some of the exhibition centres had been clustered, thereby making it difficult for some registered voters to identify and confirm their details.

Africa’s population expected to double to 2.5 billion by 2050