Tema Aflao road to be expanded into six lanes

September 9, 2019 General News Comments Off on Tema Aflao road to be expanded into six lanes 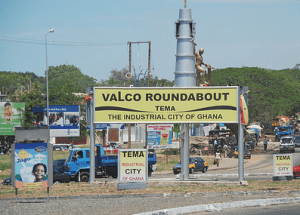 The Tema-Aflao road which forms part of the Abidjan Lagos corridor will be  expanded from the current two (2) lanes to six (6) lanes, an environmental and climate climate change consultant, has revealed.

“There will be three lanes in and three lanes out. This means that the width of the road will take 100 meters with 50 meters on each side.
The Lower Volta Bridge at Sogakorpe in the Volta Region will be expanded as well, “Mr Divine Odame Appiah told stakeholders at a consultation forum on the proposed construction.

The Ada West District falls into the ECOWAS’s Abidjan to Lagos Highway expansion alignment hence the engagement to discuss how its enhance the positive effects and mitigate the negatives on the people.

He said, “The Abidjan – Lagos Corridor Road is a highway divided into three(3) Lots. Lot 1 is from Abidjan in Ivory Coast to Apemenim in the Western Region of Ghana. Lot 2 starts from Apemenim to Akanu in the Volta Region of Ghana and Lot 3 falls from Akanu to Lagos in Nigeria. PEARL Consultancy has been awarded Lot 2.

We are therefore here to gather information to do what we call scoping reports to the Environmental Protection Agency (EPA), ” He explained

According to him,  “There are five Regions, Western, Central, Greater Accra, Eastern and Volta regions with 14 districts in all which have been captured within the alignment of the exercise. Sege, Koluedor, Adokorpe, Kasseh and communities along the road will be affected in the Ada West and East districts.”

He said, “Because of this, ECOWAS will compensate owners of various properties that may be affected either in cash or in kind if only one can claim ownership of the said property with evidence of documentation, approved by the district assembly.

This action is in line with World Bank and African Developments Bank’s regulations and Ghanaian laws which reinforce the fact that  property that will be destroyed should be replaced or, compensation must be awarded to the owner.”

Both positive and negative impacts were realised during the open forum.

The stakeholders identified some positive impacts as, movement within and outside the district to other places like Tema, Accra, Abidjan, Togo and even Nigeria will be very easy and time saving.

They said, this move will attract businesses to the district and will also boost trading activities, economic activities will improve and will reduce the rate of accidents as drivers will be comfortable when driving,

Others expressed fears that prices of plots of land and rents would rise.

They said the development would bring about kidnapping, child abuse and other malpractices by foreigners in communities along the road.

The stakeholders suggested that education on the exercise must reach every corner of the affected districts to create proper awareness to the indigenes to prevent distractions during the exercise.

Also, write ups on the exercise should be pasted at the various district assemblie’s premises, church premises and even the community radio and information centres for clear understanding of everything.

They also wanted the assembly to make property registration flexible so that everyone could have access to documents backing the ownership of their properties.

Meanwhile, PEARL Consultancy is expected to finish their work in mid 2021.