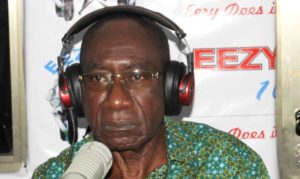 An autobiography of Mr Mike Eghan, a Veteran Ace Broadcaster has been launched in Accra.

The 284-page book titled “Mike Eghan: The Emperor’s Story, From the Centre of the World”, was launched by Professor Esi Sutherland-Addy of the Institute of African Studies of the University of Ghana.

The author started his working career as a modest bank clerk, went into broadcasting and eventually had a successful stint with the British Broadcasting Corporation in late 60s and early 70s.

This was at a time when ‘African voices’ on the world’s major networks were seen only in novelties.

Prof Sutherland-Addy said Mr Eghan’s will to share his mistakes as well as successes, made his piece of writing more valuable.

She said it was important for people to record their history life by life, on the other hand, people particularly the youth should also be reading about the lives of people who were willing to sacrifice something for Ghana.

Prof Sutherland-Addy said life was worth reflecting on before taking steps, such as, the youth needed some reflections, move on and be daring, adding that, “because many of the people like Mr Eghan, some of the greatest things they did, was done when they were young, so don’t wait; it is time for action”.

Dr Sarah Dorgbadzi, a theatre artist and a member of the Faculty of the School of Performing Arts, University of Ghana, who reviewed the book, noted that the stories were told in such a simple conversational tone that, she felt the presence of another.

She noted that this autobiography unearths some issues of human nature, Ghanaian cultural practices, and different perspectives from what all knew in the public domain.

“From this book, we get the back stories of some developments, in our country, the hands behind the hands that take action, the songs behind the songs that we hear, and many interesting details that you must get for yourselves”, she added.

Dr Dorgbadzi said in recounting how he followed the call of destiny or better still, how destiny ordered his steps along the paths of life, Eghan gave an insight into how with the help of his mother, he managed
to change from the prestigious job of a bank clerk imposed on him by his father, to the world of creativity and entertainment.

Speaking to the Ghana News Agency (GNA) Mr Eghan noted that his friends convinced him to bring up this piece, for the younger generation to learn some lessons from his experiences.

He said one of the principles that guided him in life was that he was brought up to believe in the value of respect, discipline, honesty and humility.

Mr Eghan told GNA that the younger generation seemed to be in a hurry, and they allowed their pecuniary indications to control their mind to work; stating that, “if you are dedicated to your work and you work from your heart, you even get more benefits”.

The Veteran Ace Broadcaster, who cautioned the youth against the consequences of pecuniary indications, urged the youth not to sacrifice their integrity for money.

Citing some episodes in the book, Mr Eghan said “One of the highlights of my career as a disc jockey and radio presenter was my role as emcee (master of ceremony) for the historic musical concert dubbed: ‘Soul to Soul”.

“The aim of this musical extravaganza was to bring Africans and African-Americans together to jam on the African continent to retrace their historical roots. It was believed that such an attempt would galvanize Black people all over the world along with the vision that Osagyefo Dr Kwame Nkrumah had for the Black race.”