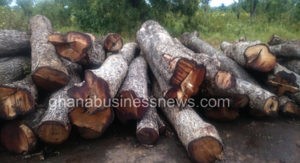 Speaking at a press conference in Accra, Mr Afriyie said, reports of institutionalised trafficking and export of rosewood are grossly exaggerated and are without basis.

The Environmental Investigative Agency in a recent report said about six million rosewood trees had been cut down in Ghana for illegal export to China since 2012.

Mr Afriyie denied the report and said official published records from the Forestry Commission showed that a total of 300,368.94m³ of rosewood products had been exported from 2012 to May 2019, with a round wood equivalent 257,230 trees and not six million as suggested.

He explained that before January 2017, Rosewood was not covered under the Convention on International Trade in Endangered Species of Wild Fauna and Flora (CITES) so all the volumes that were shipped or traded before then, did not demand CITES Permits before export.

He explained that government on May 12, 2012, initiated a ban on the harvest of the specie as part of measures to curb its exploitation and exportation.

Despite the ban a number of issues arose, as some companies had the legal documents to export rosewood and had bought timber in stock before the ban was announced.

This, notwithstanding, the Commission placed a fine of GH¢10,000 per truck, to enable them to export their stock.

“Another scenario was that, there were companies and individuals who were carrying the rosewood illegally, that is they did not have the legal documents covering the wood, and they were trying to export. These companies or individuals were arrested and their wood was seized. Forestry Commission then went for court orders to enable it to auction the seized rosewood. Confiscated consignments go through transparent auction processes.

There is a third scenario where some trucks carrying strips of rosewood, were also arrested. Owners of these trucks were made to pay GH¢26,000 per truck because the rosewood had been processed and value had been added to it.”

He said since the imposition of the ban, trucks carrying 320 containers country wide had been arrested and fines totalling some GH¢2.5 million accrued by the Commission and used to buy 20 Kantanka Pick-ups, four saloon cars and one station wagon vehicle to enhance monitoring and enforcement.

The Commission had also established 32 hectares of rosewood plantations in eight forest districts across the country with proceeds from the fines.

In all, about 19,200 Rosewood seedlings had been procured from private nurseries in Tamale and supplied to the eight Forest Districts involved in the plantation trials.

Mr Afriyie reiterated Ghana’s commitment to enforcing the ban on the exploitation and exportation of Rosewood in the country.

“Ghana is making a lot of efforts at improving forest governance under the Voluntary Partnership Agreement (VPA). The decision and implementation of the Legality Assurance System (LAS), under the VPA has been transparently done, with the participation of all stakeholders throughout the process”, added

He insisted that the ban on rosewood is still in force and the Ministry of Lands and Natural Resources had suspended the issuance of salvage permits including conveyance permits on rosewood.

“The issuance and processing of CITES permits for the export of rosewood has also been suspended”, he noted.

The Ministry of Lands and Natural Resources has constituted a seven-member Committee to investigate all allegations of corruption in rosewood trade in Ghana.

“Without any prejudice to the outcome of the ongoing ministerial investigation into the rosewood challenge, the Forestry Commission anticipates that this press conference will help to set the records straight, for the press in particular, and the general public to be well informed about the realities of the situation on the ground,” Mr Afriyie added.