We have confidence in Police Service – Interior Minister 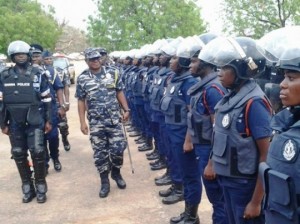 Mr Ambrose Dery, Minister for Interior has expressed confidence in the Ghana Police Service, in fighting the wave of crime in the country.

He said the nation had trust and confidence in the Service, and that with government’s commitment to providing the needed manpower and logistics, the police must rededicate themselves to the task of ensuring all elements of crime are rooted out.

“We have no doubts that the Ghana Police Service has capable men and women of world class standard to deal with crimes in the country. I entreat you to be proactive and work harder to ensure that crime is brought to the barest minimum, especially, violent crime, and also eliminate the fear of crime among the citizenry”, he told Commanders of the Service, when he opened the 2019 National Police Command Conference at Sogakope in the South Tongu District of the Volta Region.

The Minister said the need to curtail crime cannot be exaggerated, and that with practical strategies and the support from other security agencies, the threat of crime, which was affecting public confidence in the Service would be dealt with.

Mr Dery said government is aware of hurdles confronting personnel in the discharge of their duties, and would provide the help, to enhance their capacity and curtail risks associated with the job.

He stated that government in that regard, had resolved to resourcing the Service beyond its budget allocation, and has initiated residential and office accommodation projects, in addition to the provision of vehicles and communication equipment for effective policing.

He also emphasised that the welfare of personnel remained government’s priority, having cleared the backlog of promotions, and providing compensation packages for officers who fell in line of duty.

Mr James Oppong-Boanuh, Acting Inspector General of Police (IGP), said the transformation concept of the Service was under review and would require effective collaboration with the public.

He said with the upsurge in “serious” crimes such as kidnapping, terrorism, cyber fraud and money laundering, there was the need to uphold the community watch concept to “actively” engage the public in fighting crime.

The IGP also said police visibility would be resuscitated with the deployment of more personnel on the streets to help reduce fear of crime.

He said in line with its duty to guarantee the civil liberties of citizens, the Service would “deal decisively” with persons or group of persons that engaged in vigilantism.

Mr Oppong-Boanuh said the 18 months post training programme for newly passed out constables would be observed, to effectively build the capacity of personnel and added that the police administration, would ensure unethical conducts did not dent the image of the institution.

The three-day conference is on the theme “Strengthening Discipline and Supervision for Effective Crime Control,” and would offer the top hierarchy of the Service, the opportunity to map out strategies, to stay on top of crime in the country.

The conference is being attended by Regional Police Commanders, and also heads of other security agencies in the Region.