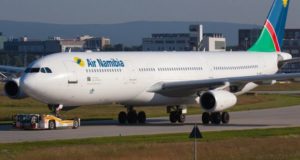 Air Namibia, the national carrier of Namibia, has suspended its Windhoek-Lagos-Accra flight services, following diplomatic issues between Namibia and Nigeria.

Mr Charles Josob, the Namibian High Commissioner to Ghana, announced this in Accra, when he paid a courtesy call on Mr Joseph Kofi Adda, the Minister of Aviation.

It would be recalled that Air Namibia inaugurated the Windhoek-Lagos-Accra route in June 2018 to provide a direct service, connecting Namibia to the West African sub-region.

Mr Josob, who noted that the suspension of the flight operations was due to the refusal of the Nigerian High Commission in Windhoek to grant visas to Namibians, said the passenger numbers did not add up again, since the route was Windhoek-Lagos-Accra.

The High Commissioner said because of the refusal of Nigeria to issue visas to Namibians since March this year, the Airline was running at a loss on the Windhoek-Lagos-Accra route.

He said as soon as the diplomatic issues were resolved with Nigeria, the Airline would resume its operations on the Windhoek-Lagos-Accra route.

He assured the Minister that Air Namibia was committed to coming back to the West Africa market.

Mr Josob said as part of their commitment to Ghana, Air Namibia had applied to the Aviation Ministry for Air Freedom License, to enable it operate Windhoek-Accra-London route.

On his part, Mr Adda urged Namibia and Nigeria to resolve their diplomatic differences amicably.

He said, he prays that African countries would help each other grow the aviation sector, particularly to make sure that African airlines take a bigger chunk of the airline traffic business.

He said at the moment, African Airlines’ share of the air traffic on the continent ranged from 20 to 40 per cent, and that the rest of it was being handled by non-African airlines.

With regard to the African Continental Free Trade Area (AfCFTA), which is headquarters in Accra, Mr Adda said Ghana is going to mobilise, to make sure that trade was made active in Africa.

On Air Namibia’s application for Air Freedom to operate Windhoek-Accra-London route, Mr Adda said the Ministry is studying it and would soon give a response.

Facebook Twitter WhatsApp LinkedIn
2019-08-24
myadmin
Previous NHIS mobile renewal platform records over 4,000 in a week
Next PPA Board says it will cooperate with CHRAJ-OSP investigations