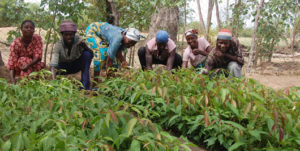 A study  conducted by the Africa RISING Project, Ghana has revealed that access to extension services, guaranteed markets for produce and poor road networks, continues to be a major problem confronting farmers in the country.

The study, “Assessing institutions enabling or constraining access to output and input markets by farm house-holds and delivery pathways for sustainable intensification technologies”, was conducted in three regions of the north.

It called for improved policies and institutional arrangements to increase participation of farming families, especially women and youth in the output and input markets and decision-making; and advocated for implementation by national government, policy makers and development partners.

The Science and Technology Policy Research Institute of the Council for Scientific and Industrial Research (CSIR-STEPRI) is a collaborating agency for the Africa RISING Project and since 2017 it has been analyzing policies that impact small-holder farmers.

The Africa RISING project, being implemented in West Africa and East Africa with several collaborators (farmers, researchers, policy institutions, among others), is aimed at generating and disseminating technologies for adoption by small holder farmers for improved livelihoods.

He said the project was linked to the Sustainable Development Goal (SDGs) 1, 2 and 15.

He said the validation workshop was to gather more inputs into the report and share widely the findings and recommendations of the report for greater policy and institutional support at various levels, to improve the living conditions of farming households.

The aim of African rising program is to create opportunities for small holder households to come out of hunger and poverty using Sustainable Intensification (SI) as a tool.

He said various factors influence the choice of farmers in using different market channels and called for action based on the significant variables revealed for the market channels, effective extension service delivery coupled with the provision of business advisory service.

Dr Adams said other areas that needed attention are the financial support to small holder farmers.

She said the benefits outlined are numerous, however, higher yields and unity in decision making are the key benefits noted from the adoption of those practices.

Dr Wilhemina Quaye, the Director, CSIR-STEPRI, said the Council embarks on policy research to generate research findings for stakeholders to facilitate national development and has the expertise on various fields to achieve that goal. She called on the public to liaise with the Council for their project proposals and report writing.

Government will support indigenous companies to grow – Minister for Planning