Cold weather in Southern Ghana expected to last throughout August

August 15, 2019 General News Comments Off on Cold weather in Southern Ghana expected to last throughout August 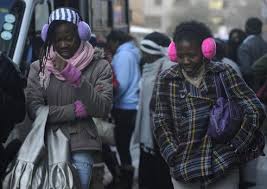 Cold weather currently pertaining within the southern part of the country, is expected to last throughout the month of August.

The low atmospheric temperatures are also expected to fall further from an average of 24 degrees celsius currently, to a lower average range of 23 to 21 degrees celsius, as the month progresses.

Mr. Michael Padi, Senior Meteorologist at the Ghana Meteorological Agency, told the Ghana News Agency that the month of August is the coldest period of the year, especially in Southern Ghana.

He added that the current weather condition removed surface water from the sea, resulting in up-welling of nutrients to the sea surface.

This he said also caused several fish to come up to the water surface, after the nutrients, and thus made the period a favorable one for fishing.