GNAT calls for rethinking of Policy of Agriculture Education

August 5, 2019 General News Comments Off on GNAT calls for rethinking of Policy of Agriculture Education 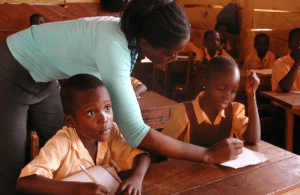 The Deputy General Secretary of the Ghana National Association of Teachers(GNAT) in-charge of professional development, Ms Gifty Apanbil has called for the rethinking of the policy of agriculture education in the country.

She explained that, even though Ghana has comparative advantage in agriculture in the world economy, the study of agricultural science in the basic and secondary education level was  continuously being down played.

Ms Apanbil said the situation had led to continuous dwindling in the number of students offering agriculture related subjects at the universities.

The Deputy General Secretary of GNAT was speaking at the closing ceremony of the one week in-service training workshop of GNAT and Canadian Teachers Federation (CTF) for selected teachers in Eastern Region at Kyebi.

She also appealed to traditional rulers, community leaders and communities to see teachers as development partners, protect and support them when they are posted to their communities.

Ms Apanbil called on teachers to be conscious of their safety wherever they are posted and if they found themselves unsafe, they should report to the Teachers Union and relocate for safety.

The First Trustee of the GNAT Council, Ms Abena Gyamera called for a determined efforts to end the high attrition rate of teachers in the Ghana Education Service.

She said about 7,000 teachers leave the service annually, which she considered too high and alarming.