Neglecting party footsoldiers will be disastrous for NPP – Loyal Ladies 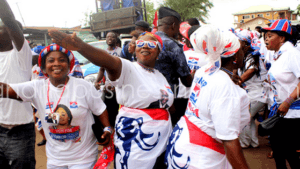 Madam Adwoa Pomaah, the President of the Greater Accra Regional NPP Loyal Ladies, has underscored the need for the Party’s top hierarchy to work closely with the grassroots to retain power in the 2020 elections.

She called for teamwork between the party’s grassroots and top hierarchy to advance the cause of the party in 2020.

She said neglecting the needs of the party’s foot soldiers who campaigned vigorously for the party to win power in the 2016 elections could negatively affect the electoral fortunes of the party.

She, therefore, urged the party to endeavour to create opportunities for the grassroots and entreated the party’s grassroots to exercise patience as Government was working to meet the needs of all Ghanaians.

Madam Pomaah made the call at the NPP Loyal Ladies maiden Regional Conference in Accra on Saturday, held on the theme,” Bridging the Expectation Gap between Party Top Hierarchy and Foot soldiers: The Key to Victory 2020 and Beyond”.

The conference was also organised to mark the third anniversary of the volunteer group, which was formed in 2016 to canvass for votes for the NPP.

Madam Pomaah acknowledged that all the needs of the party’s foot soldiers had not been met, but believed that the needs of Ghanaians are paramount and in due course they would get their fair share of the national cake.

She encouraged them not to be downhearted but work even harder in the next elections to retain power.

Mr Yaw Preko, the Deputy National Communications Director of the NPP, in an interview with the GNA outlined some successes chalked by the Akufo-Addo’s administration.

He believed the party was on course in fulfilling its campaign promises to better the lots of Ghanaians.

IFC says Ghana could be fastest growing economy in 2020