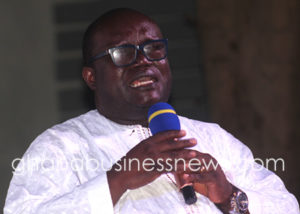 The Chief Executive Officer of Ghana Chamber of Telecommunication, Mr Kenneth Ashigbey has called for a collective effort from stakeholders to help curb the menace of fibre cuts and damage of communications infrastructure in the country.

He pointed out that the menace remained an unfortunate challenge, which affects the quality of services provided to the numerous customers across the country.

The workshop was attended by about 50 stakeholders from the road agencies, road contractors, utility service providers, local government regulators and others who work within the reservations or play critical roles in its management.

It was to among others, to address fibre cut challenges and sensitise stakeholders on what to do to ensure that their places of operations were encroachment free.

Mr Ashigbey hinted that, data gathered by the chamber showed that, there had been over 2000 fibre cuts within the last six months of 2019, and that the cuts were caused mainly by road contractors, private developers, unknown criminals and other utility providers, which resulted in the disruption of communication services leading to negative consequences in the country.

According to him, the Western Region alone, recorded more than 250 cuts representing 12.15 per cent of the total cuts.

The CEO noted that over GH¢30 million was expended without counting the cost of loss of revenue, the non-traditional temporary solutions deployed as well as additional capital expenditure to keep network availability stable over the period.

Mr. Ashigbey further said the industry also recorded over 150,000 litres of diesel, and 240 batteries stolen from the cell site with a whopping 18 million subscribers and businesses affected within the value chain.

“We cannot continue to accept this problem as the norm; therefore, we are here today to work with the stakeholders to agree to a better way of doing things to reduce drastically the impacts of these cuts, thefts and damage to our infrastructure”, he said.

Mr. Kenneth Ashigbey advised contractors to share their designs with the road and utility agencies to know how best to roll out their construction and prevent fibre cut cases.

“However, in a situation where you destroy a fibre cable, locate it so that the NCET can identify and work on it because we all owe it a duty to do what is right,” he added.

He gave the assurance that everything would be done to help curb the fibre cuts and if possible, eradicate it since fibre cables linked the telecommunication networks and there was the need for them to be protected to enable homes, businesses and industries benefit from its services.

Mr. Okyere Darko emphasized the need for public education on the need for people to seek permission from the right and appropriate authorities to avoid cable cut.

He also urged stakeholders to report to the appropriate authorities when they encounter challenges because without telecommunication, no business could flourish, now that Ghana was trying to go e-commerce.

The Metropolitan Chief Executive (MCE), Mr. Anthony Kobina Kurentsir Sam cautioned stakeholders not to wait for the assembly to construct roads before embarking on their projects as this leaves the roads damaged, considering the cost involved in road construction and repairs.

He pleaded with stakeholders to seek assistance from the appropriate quarters in the course of their duties to avoid damaging fibre cables.