Rural revitalization holds the key to employment generation in Ghana 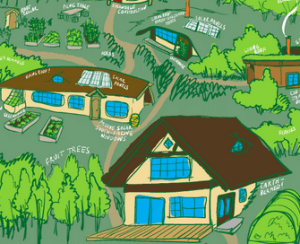 Throughout much of Africa south of the Sahara, rural households earn their incomes primarily from agriculture and rapid rural population growth is putting pressure on governments to create jobs. In Ghana, agriculture employs over 40 per cent of the population, but average farm productivity remains low, a problem for rural livelihoods and incomes. Rural poverty increased between 2012-13 and 2016-17, particularly in Ghana’s northern regions, and poverty rates were highest for the self-employed in agriculture (see GLSS 7 results). Analysis by IFPRI researchers suggests that non-farm employment growth has helped to mitigate rural poverty, though this consists mainly of low-wage, low-skill jobs in the informal service sector. Low agricultural productivity also has significant knock-on effects for value-added/agro-processing activities and for competing with imports domestically or exporting to regional or global markets.

IFPRI’s 2019 Global Food Policy Report (GFPR) draws on cross-country evidence to underscore the important role of rural revitalization in meeting these challenges, central to which are a set of key building block: s decent rural employment, gender equality, healthy ecosystems, renewable energy, and good rural governance. In particular, it emphasizes the fostering of greater rural-urban linkages and the central role of rural development in economic growth and meeting the UN Sustainable Development Goals.

While Ghana has enjoyed rapid annual GDP growth of 7.2 per cent during 2007–2017, it was driven primarily by non-agricultural sectors (i.e., oil and gas) (see Ghana’s 2018 Budget Statement ). Agriculture’s contribution to GDP growth remains disproportionately low, averaging only 3.3 per cent since 2010, as discussed in ISSER’s State of the Ghanaian Economy Report. Historically, there has also been significant underinvestment in infrastructure; the Ministry of Finance estimates a $30 billion infrastructure deficit. And public expenditures in agriculture have been far below the CAADP target of 10 per cent of total budget.

There has been government action to begin to address these challenges. For instance, flagship initiatives Planting for Food and Jobs (PFJ) and Infrastructure for Poverty Eradication Program (IPEP) seek to address farm productivity (through the supply of subsidized seed and fertilizer) and infrastructure investment in agriculture sector assets (e.g., warehouses and small dams), respectively.

How can the intended impacts of these initiatives be maximized?

Assuming PFJ generates productivity increases at scale, what are the implications for employment? If farmers produce more with the same land, that should free up labor, creating a need for new employment opportunities. And as IFPRI researchers point out, many rural households are already shifting their primary employment to non-farm jobs, especially when they are close to urban areas in the more urbanized South and in particular for youth. So, the question is how best to strengthen the productive interlinkages to enhance rural development.

More specifically, to create sufficient high-quality jobs to raise living standards and decrease urban migration to the major cities, especially by youth, the GFPR suggests a “territorial approach.” This includes strategic strengthening of rural-urban linkages to enhance market and value chain opportunities. As described by Diao and colleagues,, “A territorial approach [would] integrate secondary cities and small towns with the rural economy…such that the diversification of rural livelihoods can become a viable alternative or complement to rural–urban migration for youth.”

For Ghana, this would include speeding up the development of strategic secondary and tertiary cities by strengthening productive linkages with rural agricultural areas, for instance through infrastructure investments such as feeder roads and processing technologies. In fact, there are already some broad building blocks for this such as LUSPA’s Spatial Development Framework for the Northern Savannah Ecological Zone (2015-2035 ), the Agricultural Master Plan, and Regional Master Plans, developed to facilitate regional spatial transformation.

Furthermore, the benefits of PFJ and IPEP could be enhanced if the complementarities and synergies between them are proactively advanced. As alluded to above, these investments would benefit from being integrated into a territorial approach designed to integrate specific rural economies with nearby towns and small cities. This is likely to be more efficient and effective for generating rural employment and transforming rural areas. The sustainability of the programs will also be enhanced to the extent they factor in local development priorities and links to regional infrastructure (transport, water, etc.), interventions, and markets through a focus on local backward and forward linkages.

Furthermore, a systems approach to these activities—that considers rural development issues across the key building blocks listed above—can create further positive synergies and feedback loops and avoid unexpected negative effects. The case for a multi-sectoral synergistic spatial development approach to sustainable livelihoods for Northern Ghana is also made in UNDP’s 2018 Northern Ghana Human Development Report. It provides a snapshot of the multi-sectoral drivers  of the state of under-development while pointing to the significant socio-economic transformation that is possible in the region.

As expressed by President Akufo-Addo, priorities including employment, economic growth, value addition, and infrastructure development are central to attaining his vision of a stable and prosperous “Ghana Beyond Aid.” The country is at an important crossroads; strategic actions, such as territorial approaches, to address these priorities could build on current growth to accelerate progress towards widespread development for all Ghanaians.

There is no green revolution without tax justice