Home / General News / TWMA pledges GH¢5,000 worth of fuel to Police in the jurisdiction monthly

TWMA pledges GH¢5,000 worth of fuel to Police in the jurisdiction monthly

June 25, 2019 General News Comments Off on TWMA pledges GH¢5,000 worth of fuel to Police in the jurisdiction monthly 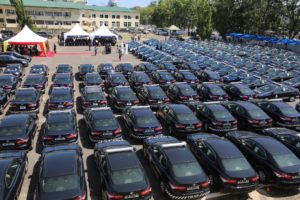 The Tema West Municipal Assembly (TWMA) will from this month provide GH¢ 1,000 worth of fuel to each of the five district police commands in its jurisdiction to aid day and night patrols.

Mrs Adwoa Amoako, Tema West Municipal Chief Executive, announcing this on Monday said “in our attempt to improve the response rate of our police men and women, the Assembly will, with effect from this month provide fuel worth GH¢ 1,000 to each District Police Command to be used strictly for their day and night community patrol duties”.

She made the pledge when her outfit presented some items worth GH¢200,000 to the Baatsonaa Divisional Police Command as part of efforts to make the presence of the police felt effectively in the area.

The MCE noted that as a result of the booming economic activities associated with the rapid development taking place in the Municipality, there had been an influx of all manner of people settling in the area, posing threat to the security of residents.

She said in tandem with the Assembly’s interest in providing security in the Municipality, it was imperative that they ensured the security in the community by collaborating with the police and other national security agencies such as the Bureau of National Investigations (BNI), Immigration Service and the Ghana National Fire Service.

ACP Adjem was grateful to the Assembly for its efforts to help the police executive their mandate.

He appealed to the Assembly to consider providing more police stations and posts in the area to help fight crime as the place was becoming densely populated especially with the uncontrolled siting of wooden kiosks.

He urged the TWMA to strictly enforce its bye laws on development in the area to help reduce the crimes.