Proliferation of arms is recipe for disaster – High Court Judge 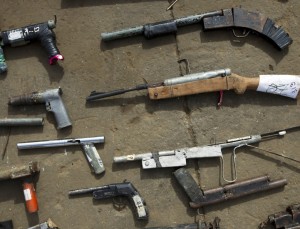 Justice Constant Kwaku Hometowu, Justice of the High Court has expressed concern about the reports alleging proliferation and possession of arms and ammunition by individuals in nation.

“If Rwandan genocide perpetrators relied mainly on machetes to massacre an estimated 800,000.00 people in just one hundred days, the potential of the huge stock pile of arms in this country is surely a recipe for disaster and therefore a worrying phenomenon,” he stated.

Justice Hometowu was speaking at a seminar organized by the Social Sciences Department of Akropong Presbyterian College of Education on the topic: “Wars, internal and external displacement of people and how they affect the spread of HIV/AIDS and other endemic diseases”.

The seminar forms part of the academic innovation adopted by the department to invite prominent citizens to speak on examinable topics to give the students perspectives from professionals across field.

Justice Hometowu said “Ghana is our only beloved country, we have nowhere to run to in times of war. This calls for a concerted effort in averting any disturbance in the nature of civil unrest, which could metamorphose into war”.

“These are natural consequences of war. It therefore means that wars must be avoided in the supreme interest of service to humanity, democracy and human rights,” he said.

Explaining the effect of war, Justice Hometowu noted that, effects of war on people are varied and dependent upon many different factors; soldiers are affected by war in ways that are different from their families, who are also victims.

He said the effects of war on soldiers often involve emotional and psychological issues, as well as obvious physical injuries that result from combat. Many soldiers suffer from a condition known as Posttraumatic Stress Disorder (PTSD) which is the result of severe trauma.

Soldiers experiencing this condition often have flashbacks in which they relieve moments of terror.

He said whilst the families of soldiers are affected by war and may experience secondary traumatization.

He said children with one or more parents deployed may experience nightmares and anxious behaviour caused by constant worry. People who are living in areas that are affected by war are the innocent victims of combat, suffering physically and psychologically.

He said these people can lose loved ones as collateral damage and experience the terror of battle first-hand. If homes are lost, many of these people are forced to become refugees until their country is rebuilt.

Justice Hometowu noted these are some of the major reasons why countries and individuals must avoid war at all cost; “war is avoidable…we must not create conducive environment which will lead to self-destruction through war.

“Ghanaians must therefore work together to defuse threats of war; we must expose evil deeds especially those allegedly stockpiling arms”.

Justice Hometowu explained that global statistics on displacement by the United Nations High Commission on Refugees is that 68.8 million forcibly displaced people exist worldwide, out of which 40 million are Internally Displaced Persons (IDPS), 25.4 million are refugees, and 3,1 million are asylum seekers.

He said again, 44,400 people a day are forced to flee their homes because of conflict and persecution.

He said the 1992 Constitution of Ghana frowns upon degrading treatment to persons and upholds human rights not only of its citizens but of all humanity; “the dignity of all persons shall be inviolable,” and that “no person shall, whether or not he/she is arrested, restricted or detained, shall be subjected to torture or other cruel, inhuman or degrading treatment or punishment.

“Any other condition that detracts or is likely to detract from his dignity and worth as a human being”.

Mrs Georgina Fiona Agyeibea, Head of Department of the Social Sciences Department of the Akropong Presbyterian College of Education explained that the department has adopted innovative ways to educate and build our future teachers.