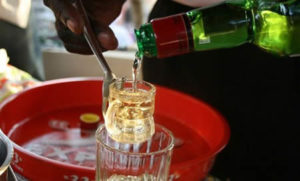 The Ghana Health Service (GHS) Ketu South Municipal Directorate has bemoaned what it calls rising levels of alcoholism and hard drugs usage among the youth in the area.

The practice is said to be causing a rise in mental disorders among them in the Municipality.

Mr. Joseph Degley, Municipal Director of GHS, said this in his report during the Municipal 2018 Annual Health Review meeting at Aflao.

“There are increasing use of alcohol, hard drugs and related substances by the youth of the area leading to increasing cases of mental disorders among them”.

Mr. Degley, who though did not give statistics, expressed worry over the issue and appealed to youth groups in particular, as well as parents, schools and religious groups to help fight it to secure the future of the youth.

He said in the year under review, six of such mentally ill patients were successfully treated and each given a GH¢800 seed fund to establish themselves, thanks to the help of a German NGO, “On The Move “.

One other youth, fully treated of mental illness, Mr. Degley said is “currently attending a Teacher Training School in Togo and continues to visit us during the holidays”.

He also cited the cases of proliferation of quack medical practitioners and invasion of radio airwaves of all kinds of advertisements of drugs and cure for all manner of diseases and ailments.

Mr. Degley, threatened to bring such quack doctors to book, advised the public to be wary of them as well as the advertisements claiming cure for many  diseases and ailments to avoid jeopardizing their health.

Mr. Degley called on the public to expose such quack doctors from their obscure corners and hideouts for elimination in the general interest of the people.