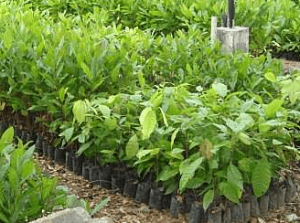 A total of 592 farmers in the Asante-Akim Central Municipality have received 120,000 free cocoa seedlings under the Planting for Export and Rural Development (PERD).

Funded by the Municipal Assembly, the seedlings were nursed by the Department of Agriculture for onward distribution to interested farmers who had registered to participate in the PERD programme.

The programme, which seeks to create a sustainable raw material base for farmers across the country to increase Ghana’s revenue in the exportation of cash crops, has received encouraging patronage in the Municipality.

The Municipality, which is known as a major producer of cocoa and oil palm, has opted for the two crops and the Assembly is embarking on mass production of seedlings to encourage more farmers to embrace the programme.

Mrs. Susan Akomeah, the Municipal Chief Executive (MCE), speaking at a ceremony to distribute the seedlings to the farmers, said the initiative demonstrates government’s commitment to economically empower farmers to improve their living conditions.

She said, it is the expectation of government that the incomes of farmers who participate in both the Planting for Food and Jobs (PFJ) and PERD would significantly improve and by extension impact positively on the lives of their dependents.

She entreated the youth to take advantage of the heavily subsidized packages under both programmes to go into farming, adding that, there could not be a better time to adopt farming as a business.

The MCE announced plans to nurse additional 150,000 seedlings and urged other farmers who had not registered to get involved.

The Assembly, she assured, is taking step to serve those interested in planting oil palm and implored them to exercise patience.

US partners Ghana to translate health research findings into action