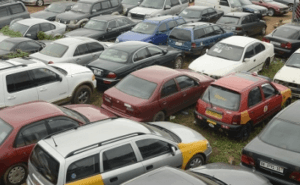 The global automotive industry is facing a far-reaching crisis due to declining sales in almost all major markets, according to a new study from a German university institute.

Global sales of new cars could fall by more than 5 per cent, to 79.5 million, this year, the Centre for Automotive Research (CAR) at the University of Duisburg-Essen said in its latest analysis published Wednesday, which includes figures for May.

That would be the sharpest downturn observed since the 2008 financial crisis.

The study’s lead author, Ferdinand Dudenhoeffer, said that the global tariff and sanctions dispute triggered by US President Donald Trump was the major cause for the development.

The Chinese market was the greatest cause for concern, Dudenhoeffer said, with sales so far in 2019 down from the previous year.

The study anticipates a decline of close 10 per cent across 2019 in China, the world’s largest automotive market. In western Europe, the decline is predicted to be more moderate, at 3 per cent.

Researchers found that US producers, specifically General Motors, Ford and Tesla, are worst-affected at present.

Also Wednesday, German carmaker Volkswagen announced a year-on-year dip in sales for cars from its core brands in China and Europe.

“May was a month full of light and dark for Volkswagen in terms of deliveries,” said VW sales director Juergen Stackmann. VW sold 512,100 cars worldwide last month, 5.1 per cent less than in the same month last year.

How the use of alcohol becomes a public health threat

Port security says they will continue to safeguard Ghana’s ports